Who's in charge here? 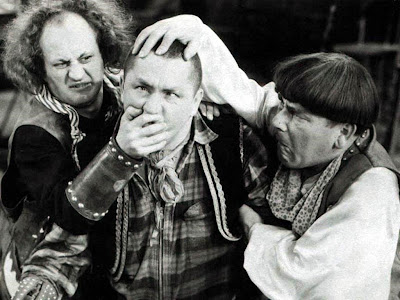 As if you didn't know.

Stephen Harper didn't hear about Suaad Hagi Mohamud's plight until last week, he says. But Foreign Affairs Minister Lawrence Cannon doesn't have even that implausible deniability. He knew about what had been done to her by the Canadian High Commission in Nairobi on June 12.

Yup, you read that right. About two weeks after Mohamud ran into trouble.

Her Member of Parliament, Joe Volpe, spoke to both Cannon and his parliamentary secretary Deepak Obhrai on that date. Six days later, he put it all in writing:

If the arrested woman is an "imposter," where is the real Suaad Hagi Mohamud, the Toronto mother of a 12-year-old boy waiting for her to come home?

Are the foreign affairs department and RCMP looking for her?

Over four weeks, with the House no longer sitting, Volpe persisted with 20 emails, faxes and phone calls to Cannon and Obhrai.

And now these two staggeringly incompetent ministers are in charge of their own internal investigations of DFAIT and CBSA? Give me--and all the other taxpayers on the hook for a wad of dough that will eventually have to be paid to the wronged Mohamud--a break.

Too bad the $2.5 million isn't coming out of the pockets of those directly responsible for this outrage. And maybe from those who were fool enough to vote for them.

[H/t Kateland, in serious danger of losing her conservative street cred. :)]
Posted by Dr.Dawg at 7:46 PM