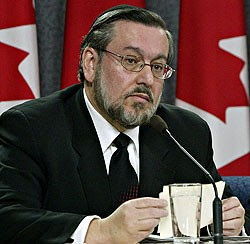 The faculty of the Carleton University department where I am presently a graduate student, Sociology and Anthropology, is not impressed with President Roseann Runte for the university's abrupt termination of lecturer Hassan Diab.

A meeting of department academics has now called for the reinstatement of Diab, citing the university's own procedures. And it unanimously supported the Chairman, Peter Gose, and the Dean of the Faculty of Arts and Science, John Osborne, for their initial hiring decision.

Employing sessional lecturers, who are represented by a union, is subject to seniority rules. Diab was at the top of the list.

"We have to get back to the situation where we respect the collective agreement and the rule of law. And the presumption of innocence. It's not about anyone's politics. It's about procedure and it's about respect."

Gose sees the latest action by the university administration as a "continuity" of the banning of an Israeli Apartheid Week poster last February. (And so do I.) Indeed, the current President appears particularly susceptible to pressure from certain lobby organizations.

B'nai Brith, whose public protest against the hiring of Diab was followed by his firing in literally a matter of hours, is not happy with the blowback. Frank Dimant, its executive vice-president, is now in full McCarthy mode. He asks us to believe that he's "fighting an uphill battle" against a "coalition of neo-Nazis, left-wingers and academics."

Then he lets loose this obscenity, which says more about Dimant and the organization he represents than anything anyone else could say:

It's appalling university professors would lobby for the reinstatement of a professor who is alleged to have bombed a synagogue. And one asks this question: is it because a synagogue was bombed? [emphasis added]

And President Runte takes what this shtick dreck has to say more seriously than the opinions of her own faculty? For this she tears up procedures and contracts, and sets about stifling freedom of expression on campus? Carleton is indeed in serious trouble.

Meanwhile, if B'nai Brith is to retain any credibility whatsoever, it must apologize immediately to the Carleton academics it has so grossly slandered. This cannot stand.