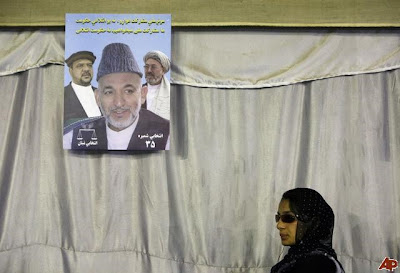 Fresh from signing into law a measure that will allow husbands to starve their wives if the latter refuse to put out, Hamid Karzai, odds-on Western favourite to win the model parliament elections in Afghanistan, has been looking for allies to cinch his victory.

So he's reached out for support from an old friend of the West (once he had switched sides to oppose the USSR back in the day), General Abdul Rashid Dostum. And Dostum has enthusiastically complied.

"We need to go with Hamid Karzai into the future," Dostum told cheering supporters in Shiberghan, his dusty home city.

Dostum's backing could deliver enough support to swing the election for Karzai in a single round, despite grave fears expressed by the United States and the United Nations over Dostum's possible return to a position in government.

Polls have shown Karzai firmly in the lead with about 45 percent of the vote, but not enough to win an outright majority and avoid a run-off against Abdullah, Karzai's former foreign minister who has strong support among ethnic Tajiks in the north.

"We must not let it go to a second round and back Hamid Karzai," the heavily protected Dostum said before throwing red velvet-covered copies of his political manifesto to the crowd.

"There will be a day, God willing, when I can help all of the people of Afghanistan again," said Dostum, who addressed the crowd in Dari, Pashto, Uzbek and Turkmen.

Some Afghans, however, might not relish the sort of help Dostum has been known to provide.

The mass deaths occurred in November 2001, after thousands of Taliban fighters surrendered to General Dostum’s forces in Kunduz and were transported to a prison run by his forces near Shibarghan.

Survivors and witnesses later told The Times and Newsweek that prisoners were stuffed into closed metal shipping containers and suffocated, or were killed when guards shot into the containers.

Back to the future we go. A war criminal holds the balance of electoral power. Another Northern Alliance warlord is running for first VP. Never mind. These two thugs, after all, are our thugs. The only problem is, that's all we seem to have in the game: thugs. And then there's the Taliban: more thugs. Thugs vs. thugs, and the dance continues, at a cost so far of 127 Canadian lives.
Posted by Dr.Dawg at 11:49 AM