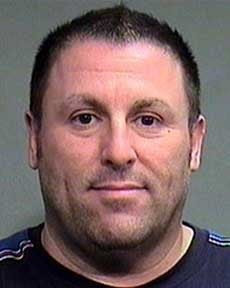 "Just a regular guy." That would be Fernando Manuel Alves, the lovely chap in the photo, who has, it seems, a bit of a history.

I just finished blogging about his recent plea bargain, in which he agreed to plead guilty to one of four charges of rape.

This is what he pleaded guilty to:

It was revealed during the trial that in October 2006, a woman in her 30s woke up in Alves's bed, bruised and bleeding after an evening at a downtown Vancouver nightclub.

The married woman — who cannot be identified — said she had no recollection of meeting Alves the night before.

Medical testing confirmed she had had sexual intercourse and found traces of alcohol and sedatives in her system.

The woman told the court her will to live had been drained because of what happened to her and that she was unable to feel safe or to be intimate with her husband.

The prosecutor was seeking a 12-18 month jail term. But the judge disagreed, sparing Alves even a night in jail for his crime:

In sentencing, the B.C. provincial court judge said Alves was not pathologically dangerous but had committed a crime of opportunity. [emphasis added]

The judge ordered that Alves be placed on the sex-offender registry for the next 20 years but that he not spend time in jail.

Sweet deal for a "prominent member of British Columbia's ball hockey community." (Sounds like a sick euphemism right about now, doesn't it?) Indeed, the man seems to live a charmed life: there has been a distinctly odd pattern of botched police investigations, police mistreatment of at least one victim, and in the end a plea-bargain and a wrist-slap.

But why am I blogging about this again? Because I've been doing a slow burn about the judge in the case. It's routine for the identity of a victim of sexual assault to be kept out of the press. But, as I have already pointed out, the judge's identity has been kept under wraps as well.

It gets worse. Mysteriously, the BC Provincial Court judgement database carries entries for yesterday and the day before, but nothing at all for Monday, which was the date of sentencing. And the name "Alves" is nowhere to be found therein.

This is intolerable. No judge dispensing public justice should be granted anonymity, which appears to be the case thus far. We do not vote for judges in Canada, something I am agnostic about, but at the very least they should be held accountable in the court of public opinion.

The sentence handed down to this brutal man indicates, at least to me, that the judge is as dangerous to women as the defendant. His continued anonymity cannot be permitted. I am asking anyone with information about his identity, therefore, to email me, and we'll take it from there.

UPDATE: The presiding judge was the Honourable Justice Gregory M. Rideout (coordinates here). Further information--about his trial record--would be appreciated. Email welcome. Meanwhile, Alves is still on the executive roster as Tournament Director of the BC Ball Hockey Association.