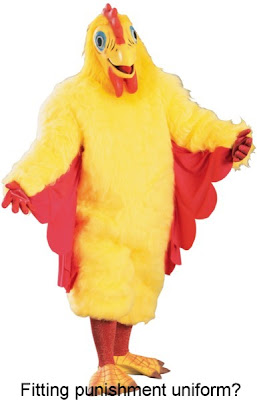 When I first came across this story at Robert Jago's place, I thought I was reading something cribbed from The Onion.

The City of Surrey and RCMP lined a Whalley social service building with chicken dung to keep homeless and vagrants away, The Leader has learned.

On Aug. 14, witnesses saw City of Surrey staff pull up to the Front Room Drop In Centre in the 10600-block of 135A Street and line the building with putrid poultry manure. The desired effect was to create a smell so repugnant that it would repel vagrants who were hanging out around the building.

One local on 135 Street said on Saturday that there were at least two visits by city trucks dumping the manure in the area. There is also evidence of the same substance on the base of large trees in the park west of the Surrey Food Bank on 135 Street.

Coun. Barinder Rasode said the manure plan was hatched by the Mounties.

"Our understanding is the RCMP initiated it," said Rasode, who was "deeply troubled" by the strategy.

An e-mail to the mayor from Deputy City Manager Dan Bottrill says that "Surrey RCMP initiated this in order to dissuade individuals from loitering against the buildings bordering the lot."

Rasode insists elected officials did not know about the initiative.

[Acting Mayor] Rasode said councillors and senior civic managers had no inkling the chicken dung strategy was going to be trotted out by its own staff. Early on, the deed was mistakenly linked to the RCMP. “I'm very glad to point you back to the city on this one,” a relieved RCMP officer told an inquiring reporter.