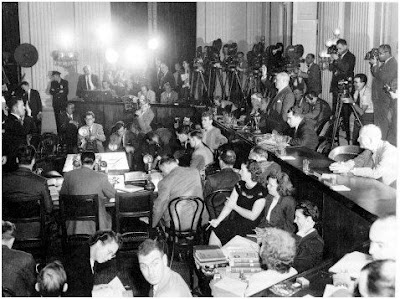 All it takes is an accusation; sometimes not even that.

Maher Arar got his taste of Canadian-style "extraordinary rendition" So did Abdullah Almalki. And Ahmad El Maati. And Muayyed Nureddin. Abousfian Abdelrazik got six years of extra-legal exile.

Now civilians are gleefully getting into the act. Hassan Diab, accused of bombing a synagogue nearly three decades ago in another country, has been deprived of his livelihood. And some Canadians are mindlessly rushing into print to applaud.

It doesn't matter that the case against him looks suspiciously circumstantial; that he hasn't even had an extradition hearing, much less a trial; and that there hasn't been a scintilla of evidence produced by those who have worked with him over the years that he is anti-Semitic or even particularly interested in Middle East affairs. His name is Hassan Diab, not Bob Smith. He is therefore guilty until proven innocent. And those who support him must themselves have the darkest of motives: his university colleagues, the Canadian Association of University Teachers, and his union.

Lee argues that Carleton has every right to kick Diab out. The administration, not the mere academics, gets to call the shots, he huffs.

He treats us to this nonsense:

Restated, my sociology colleagues are saying -- albeit in code -- that professors as administrators are not accountable or responsible to any university norms or university policies or university constraints of any kind. They are saying: Whatever we do is lawful and appropriate and may not be challenged by anyone else.

These neo-McCarthyists, like their forebears, not to mention the Salem witch-finders, are very good at decoding. Everything means precisely what they want it to mean. But in any case he appears to have aimed rather wildly and hit the wrong target:

Almost 35 years ago in 1974, Richard Nixon resigned the presidency of the United States. Nixon was forced to resign because he thought that whatever the president said or did was lawful.

In rejecting this assertion, the U.S. confirmed yet again a principle first enunciated in the Magna Carta 800 years ago -- that no person in society, no matter how powerful (or how well educated), is above or beyond the law.

Except, it would appear, Carleton President Roseann Runte, who is clearly the real Richard Nixon in Lee's failed analogy. She has, after all, ignored procedural fairness and behaved like an absolute monarch.

Being a professor of management, Lee is duty-bound to witter on about governance structures and such, which he does at length, but his main point is simple, indeed trivial: it's prudent to treat people the way Diab was treated. And look at his example:

Ask Mayor Larry O'Brien, who stepped aside while the court tried much less serious charges.

O'Brien was charged with two hardly insignificant criminal offences in December 2007. He stepped aside only this past May, when his trial actually began. As noted, Diab hasn't even had an extradition hearing yet, let alone a trial. But what's a false comparison on top of a misplaced analogy when you're on the hunt?

Andrew Potter is far less restrained. In fact he throws all caution to the winds.

Hassan Diab's colleagues (many of whom I know well) are "tenured radicals," he sneers. And then, taking his cue from B'nai Brith's cranky vice-president, Frank Dimant, he effectively tells us that anyone taking Diab's side is

an anti-Semite. Here is what the learned ex-professor of philosophy at Trent University has to say:

On the third of October 1980, a bomb exploded outside a Paris synagogue on the rue Copernic, near the Arc de Triomphe. None of the few hundred worshippers inside were seriously hurt but, outside on the street, three Frenchmen and an Israeli woman were killed.

Later on television, the French prime minister, Raymond Barre, remarked the bomb was "aimed at Jews worshipping in a synagogue, but struck ... innocent Frenchmen" -- the implication being the Jews inside the synagogue were neither wholly French nor wholly innocent.

Twenty-nine years later, Barre's horrible, though perhaps unintentional, slur is being repeated by the faculty in the department of sociology and anthropology at Carleton University, through their defence of the department's right to hire Hassan Diab to teach a summer course. In this case, it is hard to interpret the slur against Jews as anything but entirely deliberate. [emphasis added]

He raves: "In the sociology department at Carleton, [being accused of being a terrorist and a mass murderer] makes you something of an anti-imperialist folk hero on a par with Fidel Castro or Hugo Chavez."

This is what Diab's colleagues actually had to say. See anything "anti-imperialist" here? Any mention of Fidel or Hugo? But for this comic-opera neo-McCarthyist, none of that is really necessary, is it? Such people, like their predecessors on the House Un-American Activities Committee more than half a century ago, trade in innuendo, smear and false accusation. Facts, having a left-wing bias, are too unreliable.

See how these people work. First an actual terrorist, Momin Khawaja, is trotted out. He has a funny name too. See? See? Then we are informed that none of the reasons stated by the outraged faculty in the Department of Sociology and Anthropology could possibly be genuine. No, says this latter-day Roy Cohn:

[W]hat's really worrisome is these claims of high principle and due process are nothing more than a smokescreen aimed at masking the more substantive issues that are at work here: an overwhelming hostility to Israel, a correspondingly hypertrophied sympathy for the Palestinian cause, and a broader sense that it is all somehow the fault of George W. Bush and his misguided war on terror.

Evidence? Well, these smear artists don't need evidence. But Potter fakes some up for us. The faculty mentioned the legacy of 9/11, whose influence in these matters is glaringly obvious--but in a bizarre non sequitur, Potter informs us that terrorism didn't start in this century. Then, after summoning up the demon Khawaja, Potter has the crust to complain that the faculty mentioned Maher Arar--who was indeed another victim of the post-911 "punish first, try later" mentality that Potter evidently shares.

He dismisses out of hand any role by B'nai Brith in this affair--the timing of its press release was, no doubt, just a coincidence--and takes grave exception to a comment by Peter Gose, the department chairman, to the effect that there is a large Muslim population on campus.

In context (but neo-McCarthyist hysterics like Potter don't fuss too much about context), Gose was pointing out, if perhaps a little clumsily, that the putative interests of Jewish students, for whom the over-protective Frank Dimant was presuming to speak, are not the be-all and the end-all. Carleton's administration, however, had banned posters and issued threats to the student body during Israeli Apartheid Week earlier this year, and has given the impression, at least, that only one section of the student population really matters.

But this is what the vile ex-professor Potter concludes: "[P]erhaps Gose believes that Muslim students might actually find it congenial to be taught by an accused terrorist and mass murder [sic]."

And then, dismissing the possibility that those who have risen to Diab's defence might be motivated by principles like fairness, innocence before proof of guilt and so on, our neo-McCarthyist says, with the arrogant and slightly cracked assurance of the ideologue, that the only political pressure evident in this case is the "anti-Israel ideological conformity that infects virtually every department of humanities and social sciences in the country."

And so the witch-hunt continues. I remember watching this madness at work in the 'fifties, although I was a child. Now, once again, the hounds are baying, and once again the media are urging them on. What's next--loyalty oaths? Jason Kenney in charge of a Parliamentary Un-Canadian Activities Committee?