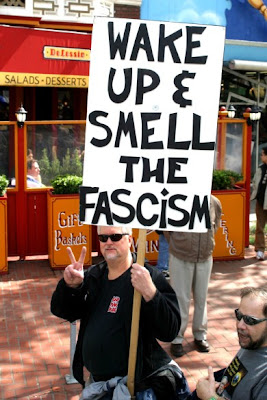 Recent execrable posts by some of the Usual Suspects, in which the killing of an unarmed protester by an Israeli Defence Forces bulldozer operator has occasioned much giggling and snickering, have prompted me to look a little more closely at the fast-disappearing line between the fascist mindset and that of some prominent blogging conservatives.

A little history first, because it's necessary.

José Millán Astray, the founder of the Spanish Legion and a key figure in the fascist government of Francisco Franco, was the man who popularized the slogan "Long live death." At what these days would be called a "panel discussion" shortly after the outbreak of the Spanish Civil War, he had a famous confrontation with the Basque philosopher and writer Miguel de Unamuno. The following passage is long, but it's worth the read, because it outlines two "ideal types" of political sensibility, about which the reader might draw certain conclusions and uncover various parallels and comparisons:

Professor Francisco Maldonado decried Catalonia and the Basque Country as "cancers on the body of the nation," adding that "Fascism, the healer of Spain, will know how to exterminate them, cutting into the live flesh, like a determined surgeon free from false sentimentalism."

Unamuno, who was presiding over the meeting, rose up slowly and addressed the crowd: "You are waiting for my words. You know me well, and know I cannot remain silent for long. Sometimes, to remain silent is to lie, since silence can be interpreted as assent. I want to comment on the so-called speech of Professor Maldonado, who is with us here. I will ignore the personal offence to the Basques and Catalonians. I myself, as you know, was born in Bilbao. The Bishop," Unamuno gestured to the Archbishop of Salamanca, "Whether you like it or not, is Catalan, born in Barcelona. But now I have heard this insensible and necrophilous oath, "¡Viva la Muerte!", and I, having spent my life writing paradoxes that have provoked the ire of those who do not understand what I have written, and being an expert in this matter, find this ridiculous paradox repellent. General Millán-Astray is an invalid. There is no need for us to say this with whispered tones. He is an invalid of war. So was Cervantes. But unfortunately, Spain today has too many invalids. And, if God does not help us, soon it will have very many more. It torments me to think that General Millán-Astray could dictate the norms of the psychology of the masses. An invalid, who lacks the spiritual greatness of Cervantes, hopes to find relief by adding to the number of invalids around him." Irritated, Millán-Astray responded: "¡Muera la inteligencia! ¡Viva la Muerte!" ("Death to intelligence! Long live death!"), provoking applause from the Falangists.

It is no surprise, really, that even "moderate" conservatives have a certain fondness for Franco, who, after his victory, proceeded to execute 200,000 Spaniards who did not share his conservative values. Some conservatives literally do want us dead. It is not people like myself who are blurring the line between fascism and conservatism, but conservatives themselves, who have claimed this monstrous historical figure as one of their own, and who almost inevitably prefer violence to argument.

Now, before Chris Selley comes over here to admonish me for painting with too wide a brush, I need to point out that there are indeed people of the conservative persuasion who find all of this sado-political embrace of violence and death as repellent as I do. My grandfather, a true-blue Tory of the old school, would have been disgusted. Frequent commenter Peter has no time for these lubricious political reveries either, nor do some of the more humane folks over at the new Western Standard. Profoundly civilized, all of them, and I could name many, many more.

But the problem with the category "conservative" is that it contains too much and too many. And that's hardly the fault of those of us who can discern, in conservative ranks, the foul and diseased psyches that found such apt expression in the words of Astray and do today in the comments to which I linked above. It's up to conservatives to clean their own house; perhaps it will take their own bloodless civil war to do it.

Death to intelligence. Long live death. For all that the Left must carry on its conscience, such scrofulous sentiments have never been laid at our door.

Which brings me, once again, to Rachel Corrie, a no-doubt naive and idealistic young American peacenik who was crushed to death by an IDF bulldozer as she demonstrated peacefully against Israeli actions outside Gaza. Well, no. In fact it doesn't bring me to Corrie at all, but to the maggot-ridden psyches of those who find her death a cause for amusement.

(I don't want to discuss the Corrie incident itself. I don't know whether the IDF killed her deliberately or by mistake. None of that is relevant to the points I am making here.)

Naive and idealistic young men and women join our own armed forces, as well. Most if not all of them believe in the Afghanistan mission, some of them are sent there, and some have been killed there. Many of us oppose that war, believing, with Stephen Harper, that it cannot be won. But I would defy anyone to find a single comment from any of us on the progressive side of the aisle about our troops that rivals the filth pouring out of the various orifices of conservative bloggers at the moment about Rachel Corrie.

Do we mock those dead soldiers? Do we make fun of them, and joke about their deaths, and urge our friends to eat hamburgers in their memory when they have been blown to bits by IEDs?

Unthinkable. It would be nauseating to us. If the word "civilized" has any meaning at all, it surely applies to those who reject the depravity of rejoicing in the violent deaths of those with whom we disagree.

Fascism is not only action and state structure: it is also a state of mind. Death to intelligence. Long live death. And we have come to know the friends and allies of fascists for what they are, because the mask of civility inevitably slips, and when that happens it can never be replaced.

The symptoms are manifest, if sometimes ambiguous. When fascists are under attack, for example, they go after the attacker. Claim it's all about freedom of speech, and protest that it's principle that's at issue, and you might even persuade some of us that you're on the level. Goodness knows I've been sceptical, but not to the point of imagining that they're all crypto-fascists themselves. Just maybe a little...soft on fascism. Now, frankly, I'm not so sure.

After all, when you come right down to it, neo-Nazis are social conservatives, with familiar views about abortion, same-sex marriage, immigration, Muslims, "race," patriotism, and (for obvious reasons) Human Rights Commissions. So when one of them falls afoul of Richard Warman, there's almost certainly a little chord of sympathy that resonates in the breasts of the oh-so-principled Speech Warriors™.

Nor are all neo-Nazis devoid of the tactical sense to hold their anti-Semitism for the time being and make Muslims the new Jews instead. That sort of thing is called "bridge-building," and it obviously helps them in their quest to achieve what in certain circles would count as respectability. Of course, they remain free to attack B'nai Brith and the Canadian Jewish Congress as they've always done--in language completely indistinguishable from the dreck you can find, for example, over at Ezra Levant's place.

But as noted, fascism is a sensibility as well as a politics. And I think, at this point, that we have ample evidence of it in conservative ranks. We don't even require the usual clues--the flags, the Celtic crosses, the unsavoury backgrounds, the unguarded racist comments--to let us know that something's up. No, the purulence of a diseased sensibility, and its leakage into the blogosphere and elsewhere, will suffice: by the odour of decay you may know them. Long live death.