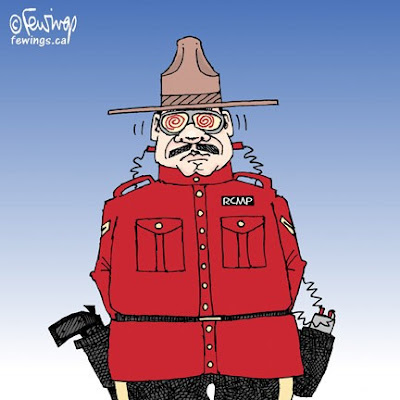 I confess I found it difficult to understand why the Braidwood Inquiry was adjourned for two weeks, right after the fantastic testimony of three of the four RCMP officers involved in the Dziekanski killing. Why not get the guy in charge, Corporal Benjamin "Monty" Robinson, on the stand right away, after the amazing hat-trick of flubbing and deceit to we we were all privy for several painful days? Were the folks in charge waiting for him to get his driver's licence back?

But no harm done, as it turns out. Just as his three underlings, with more than a year to do it, couldn't construct anything more convincing that what they brought forward, as though the video of their bad behaviour could simply be wished away, so, too, Robinson--the man who can be heard in the video shouting "Hit him again, hit him again" and whose knee ended up on the supine Dziekanski's neck-- kept up the pretence.

Robinson testified that Dziekanski was Tasered a second time before he fell to the floor, before admitting that the video did not bear him out, and claimed that Dziekanski, brandishing a stapler and raising his voice, "was advancing forward" towards the four officers before being Tasered.

Only one element of contradiction has emerged so far: Robinson stated that he had given the order to fire the Taser at the very start, whereas Constable Kwesi Millington testified earlier that he had fired the first two times without an order to do so. Now both men come off looking rather noble, each trying to take the fall for the other--if fall there be.

Then we move abruptly into the darkest of black comedy: Robinson testified that Dziekanski held a stapler in his fist and was discharging staples. Would the officers have switched to firearms had he been shooting elastic bands or paper airplanes?

UPDATE: Good grief, there's no end to this.

[Commission counsel Art] Vertlieb showed sections of the Pritchard video several times, asking Robinson to indicate the exact point where he is shown trying to calm Dzieskansi and where the Polish man is shown stepping forward, or lunging for his luggage. However, it couldn't be found.

Robinson replied it was impossible to see because of the angle and the distortion created when Pritchard shot through glass into the arrivals lounge.

I suspect I'm not the only one who resents having his intelligence insulted in this way. Kindergarten kids trying to lie their way out of trouble could hardly do worse than this feckless bunch of barefaced prevaricators.