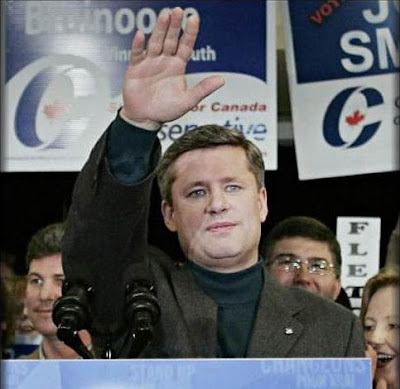 Hold on! Not so fast.

Sure, the facial recognition experts have weighed in on her side. And then her DNA test proved beyond a shadow of a doubt who she was. But our government isn't about to say, "We're sorry."

A Canada Border Services Agency spokeswoman, Tracie LeBlanc, says: "It would be inappropriate to comment ... as this matter is still before the courts."

Before the courts? Oh, right, the Kenyan courts. Where she is being prosecuted for impersonating herself--after Canadian passport officials in Nairobi confiscated and voided her passport, and then urged Kenya to prosecute her.

And we have "no comment" from Public Safety Minister Peter Van Loan.

And here's another despicable Minister, of Abousfian Abdelrazik fame:

Two weeks ago, Foreign Affairs Minister Lawrence Cannon said Mohamud must try harder to prove herself: "The individual ... has to let us know whether or not she is a Canadian citizen," he said.

Asked if he would accept a DNA match, Cannon replied last week through a spokesperson: "I cannot answer a hypothetical question."

No comment from him since the question ceased being hypothetical.

Meanwhile, in other news, Stephen Harper has indicated that beaners will continue to face obstacles if for some crazy reason they want to visit our country these days, and Minister of Citizenship and Immigration Jason Kenney is doing the same sort of thing to keep out the gyppos.

Anyone see a pattern here?

Ottawa is preparing emergency travel documents to bring to Toronto, a spokesperson for Canada Border Services Agency said this morning. No further details, such as when she might be on her way home, were immediately available.

UPPERDATE: Slip. Cup. Lip. For pity's sake, what is wrong with this government?

Ottawa is sending mixed messages about how soon it might help Suaad Hagi Mohamud return home from Africa.

On one hand, the Canada Border Services Agency said this morning it is working to issue the Toronto woman travel documents, tacitly admitting that Canadian authorities made a mistake in voiding her passport in Nairobi, Kenya, nearly three months ago.

On the other hand, no government politician has acted to get the woman home, instead leaving the federal court to sort out details.

CORRECTION: In fairness, CBSA spokesperson Tracie LeBlanc, cited above, was likely referring to the application for an injunction by Mohamud's Canadian lawyer, Raoul Boulakia, rather than to the Kenyan court proceedings. Nevertheless, the sub judice rule didn't prevent Lawrence Cannon from making his fatuous remarks four days after the matter was first brought before a judge.