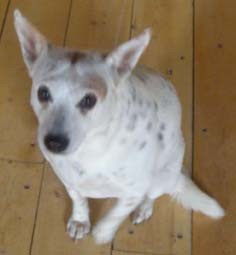 This is a personal post, but as we all should know by now, the personal is the political.

A friend of mine was found dead in her apartment last Friday. I have reason to believe it was suicide.

A little over two years ago, her common-law spouse told her that their nineteen-year relationship was over, booted her out of their house in Maine, and gave her $100K for her trouble. She was in her mid-fifties. This was all she was left with. There are no matrimonial property rights for common-law spouses in that state, no neat division of the assets.

She was an artist, and did art restoration on the side. She headed off to Montana, struggled to make a living there, then moved on to Taos, New Mexico. A few weeks ago she went back to the eastern seaboard, Massachusetts to be precise, her dog (above) in tow, found a tiny apartment and started looking for work.

Skype is a wonderful invention. We chatted two or three times a week at length, laughing, flirting a bit (at least on my side), and just talking. She was panic-stricken, you could tell, but between the two of us we managed to keep her spirits up. I'd helped her out a bit to get her started, although not to the degree that she needed, but I told her that if she was ever facing eviction or the prospect of nothing to eat, she should give me a holler and I'd make sure neither happened.

Early on, she drove past the place that she used to live--it wasn't a long drive--and saw her former dog in the front yard, with a too-tight collar. She removed the collar and threw a stick for the dog for a while, and then left. Shortly afterwards she was visited by two police officers who told her not to go near that property again. (How would they have found her? At that point she was living in a motel in Massachusetts looking for a place to rent.)

On July 19, I received a one-sentence message from her: "John.....talk me out of suicide". I was on the phone to her immediately, and we spoke for a while. She tried to give the impression, I now think, that she wasn't altogether serious: anyway, she convinced me. I told her that if she ever had thoughts like that again, though, she was to call me pronto.

We Skyped and messaged after that. She seemed to be in good spirits, loved her new studio, we could both hear the gulls outside. She was within walking distance of the sea. She went kayaking, a favourite old pastime, something she hadn't been able to do for more than two years. It rained a lot, but she told me she loved it. Not a lot of rain in New Mexico. She felt as if she was back home. And she kept looking for a job, and spent less time on-line.

On Sunday, July 26, I sent her a note: "Where are you?" The next day she sent me what was to be her last message: "Hey, stranger....Hope all's well up there......" Insubstantial stuff, both of us just checking in. I never caught her on-line after that. July 31--the day before her rent came due--she died.

How did I find out? Her ex sent an email to my ex, who has been on speaking terms with him--they both vacation on the same small Caribbean island. In fact that's where we met the two of them more than twenty-five years ago.

The last time I was there, early in 1999, the cracks were already showing. She suspected he was having an affair, and the two of them fought loudly. For his part, when he spoke of her, he was so blatantly disrespectful that I realized, affair or no, that something was going west.

And this is the email that he sent out:

I’m not sure if you’ve been notified by others, but ----- passed away last Friday at her new apartment in ---- ---. The cause of her passing is not known but she was in declining health over the past year and neglected to seek medical help for reasons known only to her. Although we are not shocked, we are saddened by her departure; we all so hoped she could find a path to a new life in this world, but, alas.

I plan to be in [the Caribbean] over Xmas and hope to be there again in February and March. If my new job keeps me from using the whole two months, my sisters ---- and ----- will happily fill in (don’t worry [name of resort landlady] ).

Feel free to pass along this sad news to the rest of your communicants.

I have been sitting on my anger--and loss, and guilt--ever since. But all of it needed to be written down. We talk every day in the blogosphere about inhumanity on the grand scale. This post is about coldness, and callousness, and vulnerability on the small scale. Two people, not two countries. One tragedy. Or is it two? Or many?

UPDATE: I have been too careful, to the point of collaborating with death. My friend's name was Ann Marcelyn Caver. Here is a tribute to her from an old friend. [H/t R. Billings, b/c]

Dear Dr. Dawg, I sit here weeping, having just learned of Ani's death. I met her in the late 80's but had not seen her for the past ten years. When we last spent time together in the spring of 2001, I was devastated to see her faith in herself so broken down - clearly the effect of her relationship with someone I did not know at all. I would not have believed this beautiful, inspired woman could be brought so low. And now, your posting tells me what I so feared. I cannot bear to think of the fear and desolation she endured. Thank you for being her friend and telling those of us who loved her the truth of her passing. svn