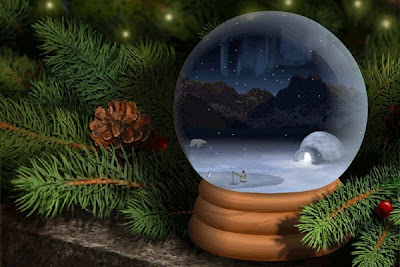 Nunavut is in the news these days, as our Prime Minister takes his royal tour, and the commentary is flowing.

Here's a letter in the Globe & Mail today, reprinted in its entirety, which highlights--inadvertently--how far astray our cultural idées fixes can lead us.

How can we rationally consider investing billions of dollars for a territory such as Nunavut, populated by a mere 30,000 people? Prime Minister Stephen Harper’s $25-million “investment” for a tiny fishing community’s harbour amounts to more than a whopping $19,000 per person. You cannot magically create economic viability out of thin air. Small, remote, unskilled populations living in harsh climates have no significant history of suddenly thriving just because money was thrown at them.

Doing so will fail, and only create false hopes and a state of dependency. We should support northern communities to pursue subsistence hunting, but the idea that they have an entitlement to infrastructure development is ludicrous.

Normally I would let this kind of thing pass without comment. But Peter Reinecke isn't just any correspondent. He's a public policy researcher in the federal government's Policy Research Initiative, a kind of internal strategic planning think-tank. As a policy consultant myself, I find this worrying. So should you.

How can we even think, asks Reinecke, of investing a wad of money in a desolate place populated by a mere 30,000 (actually, nearly 31,500) people. Thank goodness the Danes don't think that way.

Greenland, now a territory of Denmark that has achieved home rule and for whom actual sovereignty someday isn't out of the question, is populated by a little over 55,500 people, of whom 88% are Inuit or Inuit-European. Greenlandic (an Inuit language) is spoken by 50,000 of the residents, and became the sole official language this past June. It boasts a vibrant political culture, and a burgeoning Greenlandic literature.

Greenland's economy is based upon primary industries, especially fishing. Still dependent upon Denmark for 50% of its revenues in the form of government grants (the figure is currently 90% for Nunavut), the territory is actively developing its considerable mineral resources, air transport and telecommunications.

Greenland's educational system is modern and effective. It has a university in the capital city of Nuuk, and a fully functioning primary and secondary school system in which the operating language is Greenlandic. Greenland has a 100% literacy rate.

Some 2009 statistics for Greenland may be found here.

The comparison with Nunavut is frankly shattering. Nunavut is a land struggling to be born, rife with social problems arising from what was in effect imposed and poorly planned sedentarization in the 1950s and early 1960s, with chronic unemployment (28% for Inuit), a suicide rate 9 times the national average, a housing crisis and a dysfunctional educational system.

Between one-third and one-half of Nunavut children have suffered some degree of hearing loss as a result of ear infections. Teachers have to use use microphones in the classrooms.

Peter Reinecke suggests giving the Nunavummiut a few bucks to maintain subsistence hunting, but any talk of infrastructure development is "ludicrous," based upon a wrongful sense of entitlement. Clearly the notion of social and economic investment is lost on him. What we should do, he thinks, is simply freeze the Inuit culture in time, providing some funds for that purpose. For some reason I get an image of one of those snow-bottles with an igloo and a bunch of faceless people in furs. Something like the one illustrated above.

There have always been ill-informed suggestions regarding "what to do about the Inuit." Canadian anthropologist Diamond Jenness, decades ago, suggested resettling them all in the South. The dreadful Frances Widdowson thinks along similar lines today:

When the unviable character of Nunavut is recognized, the only sensible policy in the long run appears to be gradual depopulation. This does not mean forcibly relocating anyone who lives in the territory, only encouraging people to gradually migrate to larger centres. Most importantly, it means ending costly and unworkable decentralization schemes, which assume that an economic and political system can be “built” with large external rents. Nunavut, like all parasitical appendages on productive economies and societies, should be allowed to “wither away” as the younger generation seeks out a more stimulating and productive life.

Reinecke would not go that far, or at least I hope not. Rather, we should just keep up a minimal trickle of support to allow the continuance of traditional lifeways. But certainly not anything like a $25 million investment in Pangnirtung to develop the local fishing industry.

The embedded notion here is one of a "culture" that somehow remains static and timeless, a tiresome anthropological fallacy that was exploded by Johannes Fabian, for one, in his Time and the Other: How Anthropology makes its Object (1983), but still persists in the popular mind. Yet the Greenlanders, far from requiring relocation or demanding to live in a changeless past, are making use of every modern technological innovation available, working in their own language, proud citizens of Kalaallit Nunaat looking to the future. And they're doing it themselves.

There is much hope for Nunavut, although there are terrible obstacles of all kinds at present. The Nunavummiut are indeed making progress. But what is needed now more than ever is to abandon ignorance and superstition. And by that I mean ours, as exemplified by public policy researcher Peter Reinecke's ill-founded remarks.

[Disclosure: I am presently working on a thesis, when blogging and contract work don't get in the way, on the formation of Nunavut and its governance structure.]
Posted by Dr.Dawg at 9:45 AM