None is too many 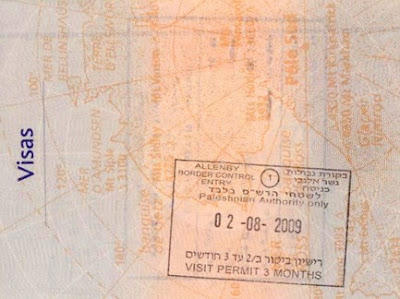 Canada isn't the only place where having a "funny name"--like Abdelrazik, Mohamud, Khadr or Arar--can get you into trouble. Try visiting Israel if you have a name like that.

Canadian and American citizens with "Palestinian-sounding names" are now routinely denied entry into Israel at Ben Gurion National Airport, and told to use the Allenby land bridge from Jordan into the West Bank. But once they get there, their passports are stamped "Palestinian Authority only," and entry into Israel is still denied.

President Barack Obama isn't any too happy with this blatantly racist treatment of American citizens. A statement from the White House reads:

'The United States expects that [sic] all American citizens to be treated equally, regardless of their national origin. We have let the Government of Israel know that these restrictions unfairly impact Palestinian and Arab American travellers and are not acceptable."

But only silence, of course, from the Harper government. Because it knows how people with those Arab-sounding names should be treated--even its own citizens.

Foreign Affairs spokesman Rodney Moore has confirmed that the government "is aware of the new Israeli practice of stamping the passport of foreign nationals with a 'Palestinian Authority only' stamp." But it's not lifting a finger.

Meanwhile Israeli Interior Ministry spokeswoman Sabine Haddad proudly defends the new racist policy, confirming that there is a ban in place barring all Palestinians from entering Israel, regardless of what other citizenship they have.

Mohammed Sabawi is a Canadian businessman. He has traveled regularly to Israel for 15 years without restriction, and worked with Israeli businesses. Recently, as chronicled by the Israeli newspaper Ha'aretz, he was forced to take the long way around, entering Palestinian territory by way of the Allenby Bridge. But he was then refused entry to Israel because of his "Palestinian Authority only" passport stamp. Read the entire story here.

To its credit, even the Canada-Israel Committee, a pro-Israel lobby group, doesn't seem happy about the new ethnic rules. "We are seeking clarification," CEO Shimon Fogel said. "We will certainly follow up with the Israelis."

As for Canadians of Palestinian origin, who have not as yet had a "P" stamped in their passports by Foreign Affairs, a spokesman is wearily aware of the Harper government's malevolent indifference:

Monir ElRayes, president of the Association of Palestinian Arab Canadians, said he was saddened but not surprised by the stark disparity between the responses from Washington and Ottawa.

“The U.S. is committed to protecting all its citizens and not allowing them to be singled out for their religion or ethnic background,” he said from Ottawa.

“The Harper government wants to disown us even though we are citizens,” he added, citing the lengthening string of cases where non-white and Muslim Canadians facing difficulties overseas were refused help by Canadian diplomats.

"Un-Canadian?" Are you kidding? Canada's New Government has delivered the government's new Canada. Welcome to it--unless, that is, you have a funny name.