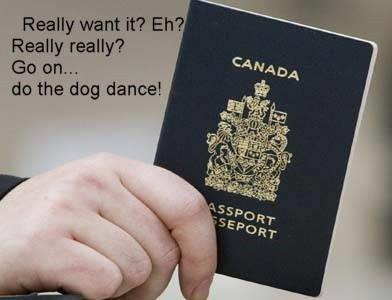 Foreign Affairs never gets tired, it seems, of playing cat and mouse with brown Canadians abroad:

An Ottawa mother's hope of quickly getting a passport for her autistic son so he can come home from Kenya were dashed after an inconclusive meeting with consular officials Monday.

Abdihakim Mohamed, 25, was scheduled to have a meeting at the Canadian High Commission in Nairobi when it was abruptly switched to a location off Canadian territory.

"I was expecting everything to be finished. Now they say something else. I don't understand," said Anab Issa, who works as a cleaner at Carleton University and has been fighting for her son's return to Ottawa for three years.

That officials would play these games under the full glare of a media spotlight speaks volumes about DFAIT's corporate culture--and the attitude of the disgraced Minister in charge, where, last we heard, the buck stops.

UPDATE: (August 27) Still dicking around. More here. Another month to get him back. A one-way emergency document but no passport. "Doubts" remain. These people are simply beyond shameless.