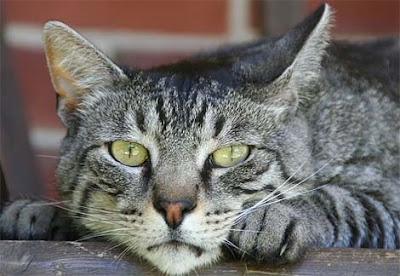 This one nearly got me to join PETA.

An inexperienced Alberta provincial court judge, Shauna Miller (appointed just last year) has delivered a judicial wrist-slap to two teenaged sadists who microwaved a cat to death for pleasure. The beast was cooked alive, screaming in pain for ten minutes. Afterwards, the killers scrawled "You had a nice cat" and "Look in the microwave" on a wall for its absent owners to see when they returned.

A year's probation. A few hours of community service. They can't have violent video games for a while, but they can keep their cellphones. And, oh, yes, they aren't allowed to have pets for two years. One of the families who raised these monsters had just acquired a dog. Defence counsel thought the sentence was a bit extreme in that respect, because they now have to get rid of it.

One of the young convicts, according to a report filed with the court, lacked guilt, remorse and empathy, but "is capable of understanding his act." So, unfortunately, he can't be held in an institution for the criminally insane at the pleasure of Her Majesty.

Animal rights activist Tove Reece had been gulled by someone when she told the press that the judge had her hands tied with respect to imposing jail time. Untrue. After the passage last April of the much-maligned Bill C-203, ample opportunity for jail is now spelled out in the Criminal Code:

(a) wilfully causes or, being the owner, wilfully permits to be caused unnecessary pain, suffering or injury to an animal or a bird;

(a) an indictable offence and liable to imprisonment for a term of not more than five years; or

(b) an offence punishable on summary conviction and liable to a fine not exceeding ten thousand dollars or to imprisonment for a term of not more than eighteen months or to both.

The stark horror of the act would certainly allow judicial discretion in this respect, even given the strictures of the Young Offenders Act. This case, in fact, cries aloud for appeal by the Crown, but Crown prosecutor John Laluk hasn't exactly put his shoulder to the wheel so far. He didn't make the slightest effort, for example, to have these young men tried as adults, and he claimed before sentencing that they "have expressed extreme remorse and would like to apologize to the cat owners before being sentenced." This is a flat-out contradiction of a court-ordered psychiatric assessment, which determined, as noted above, that one of the young men lacked any remorse at all.

Laluk said in court yesterday that the teens were relatively normal kids who showed no signs of mental illness and were not intoxicated during the incident on Dec. 30, 2007.

"Chris Milsap, the defence lawyer for one of the teens, says the boys are good kids who did something wrong.

"'It's an appropriate sentence,' he said. "I know that's difficult for some people to accept."

Why, yes--it's difficult for decent people to accept, you patronizing twit. And I suspect that there are more than merely "some" of us around.

Tove Reece was the only one to get it right, although I can't admire her understatement:

You have to wonder how these kids listened to that and not done something. I mean, a clear signal of distress. To me, it shows that something is amiss that these kids are lacking compassion at some level.

The names of the "kids" have been suppressed. Given that they should have been tried as adults in the first place, this is plain wrong. Communities have a right to know what manner of dangerous and unstable individuals are living in their midst. You read it here first: there's a distinct possibility that at least one of these young men--the one without guilt, empathy or remorse--will kill again. And this time, the quarry will be human.
Posted by Dr.Dawg at 2:30 PM