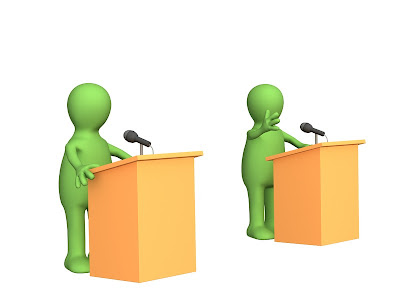 Well, I don't know what I'm going to watch on the evening of October 2: it seems, as Kelly McParland writes in an amusing column today, that the "reigning geniuses in debateland" have scheduled the second all-except-Green leaders' gabfest at the same time as the US Vice-Presidential debate.

So it's a choice: watching Sarah Palin being wolfed down by Joe Biden, or listening to our carefully-prepared, on-message leaders deliver scripted lines and try to look spontaneous. Who knows, a ray of emotion might even be detected in the latter--the mere possibility of that should keep us all on the edge of our seats, yawning.

I think I'll probably take in the political cannibalism down south. It promises to be viscerally entertaining, as unequal contests always are (come on, let's be honest here). And I can always pretend that giving in to my dark side is motivated by principle, even if the same establishment nonsense shut out the Nader/Gonzalez ticket. Yes, a boycott of the leaders' debate. Just the thing. I feel my virtue being restored as I type this.

Canadians love principle. It's something we can grasp, and feel good about. And, I hasten to add, that's a good thing. I'm not being cynical. In the past few days there has been a torrent of bitter criticism of the TV consortium for backing down on the Elizabeth May participation issue. 66% of Canadians want the right to see her in action, even if they don't exercise it: most, in fact, wouldn't vote for her no matter how brilliantly she performs.

But we're fighting for the underdog. That's what we do (unless we're Conservative, in which case we kick the underdog and say it's all the underdog's fault). Most of us have a deep sense of fairness in this country. We think people should get a shot. We don't like bullies. In the words of the famous New York PM Magazine, we 're against people who push other people around.

We're standing up, in other words, for the right of a person most of us wouldn't dream of voting for, a person with all the finger-wagging, sententious charm of a schoolmarm on steroids, to take part in two evenings of talking heads whose words have been anxiously assembled by assorted backroomers and handlers and popped in their mouths like breath mints just before showtime.

Kind of makes me proud to be a Canadian. I mean it.

Unbelievably, Jack Layton, the leader of the party whose card I carry, is still defending the indefensible. Someone must have told him that changing one's mind, even for the better, doesn't look decisive and leaderly. But he's managed to observe only half of the old adage, "Never explain, never apologize." He's still explaining, and he just won't stop digging until he emerges somewhere in China.

Just look at this report from yesterday:

Layton was asked how he can cast himself as the champion of the anti-establishment, a leader who would bring change to Ottawa, while at the same time defending the status quo when it comes to the debate.

"I'll tell you what the status quo is," the NDP chief fired back -- successive Tory and Liberal governments that represent the old-school establishment.

"We have someone else who wants to be in the debate who actually supports the leader of one of those parties," he said of May.

"I don't agree with that position. I think what we want to do is take on the same old same old, which is the Conservative and Liberal governments in power year after year."

Layton also tried to shift responsibility for the decision to exclude May to the consortium of television networks that will host the event, which takes place Oct. 1-2.

Shorter Layton: "Keep May out because I don't like her politics, but hey, I had nothing to do with that decision." Good grief. It's downright embarrassing.

The reality is that Liberals stand to lose some so-called battleground ridings because rising Green support is eating into their base. The Greens are, in other words, seriously running against them, not collaborating with them. But as the leader of a party that has no chance of forming a government, May has every right to indicate a preference for what she regards as second-best.

Never mind all that, though. None of the arguments against her appearance hold water, because there are no principled arguments to be had. It's all about exclusion and power. You want to "take on the same old, same old," Jack? Look in the mirror and start right there.

Yup, I guess it's Palin v. Biden for me, all raw meat and attack dogs. That sort of thing is banned up here, I think. But you can call my choice a boycott, if you like. Hell, the way I'm feeling right now, I might even boycott the election.

UPDATE: I can't leave my house on business even for a few hours without being overtaken by events. Jack Layton and Stephen Harper have reversed their positions this afternoon and cleared the way for May's participation. Nothing like a groundswell of popular protest to produce a "change of heart." Bravo, Canadians!

It is through the use of this medium that they wish to make in roads in the communications market.
If you are a reader of local language newspapers it might get
difficult for you to find your desired language
newspaper any where else. Today, Most of newspapers are offering their online editions.
Kanchan Kumar Vaidya writes about Newspapers , Hindi Samachar , Online Hindi
news. The dishes and ingredients differ slightly from region to region, with each region having their own specialties.