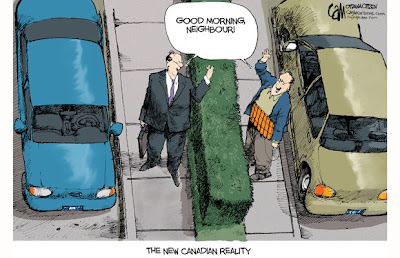 Always wanted to act in a film? You're in one now, in real-time: The Invasion of the Body-Snatchers. Your neighbours, even your own family members, seem like regular people, but they're...different. Search your neighbourhood for pods.

Presumption of innocence? Don't make us laugh. This is no time for abstract principles. How could these alleged terrorists turn on us in this way? Why? They seemed so normal!

An effortless transition has quickly taken place in the popular mind: Why don't those niqab-wearing, mosque-attending people blend in and become like us? has now become, They're blending in and becoming like us! Security!

Meanwhile, one of the suspected terrorists, Rizgar Alizadeh, strongly proclaims his innocence, but guilty people do that all the time. The McGill-trained doctor and Canadian Idol contestant, Khurram Sher, played ball-hockey. He worked in a Montreal soup kitchen, and volunteered for a month of service in an Israeli hospital. Alizadeh's brother Hiva liked Canada for its wealth and kind people: "He was saying lots of good things about Canada's economy and it was really good for him because he was working and had enough to do."

The overstimulation of the body politic's reptile brain continues. The t-words are everywhere. "The threat, as exemplified by the arrests of three Canadian citizens this week, including a McGill University graduate of medicine..." ("Exemplified?" What on earth does that mean?) "A New Threat: Homegrown and High-Tech," blats Canada's National Newspaper, noting in the deck that an alleged conspirator denies the charges.

"How Terror Came Home to Roost," blares the Ottawa Citizen above the fold. "[T]he cancerous result of al-Qaeda's successful marketing of Islamic extremism," shrieks the deck.

"The spectre of terrorism," we are informed, "continues to haunt North Americans....[A]s highlighted by this week's unmasking of an alleged bomb plot in Ottawa, the threat increasingly comes not from strangers with rough English and dubious passports. Instead, it resides much closer to home: in urban townhouses, darkened basements--anywhere with an Internet connection."

While in the past the government has "had a hard time proving" other alleged terrorists dangerous, "the terrorist threat in Canada has continued to evolve." CSIS director Richard Fadden says, "It's the people who have been in this country for quite a while who are rejecting the very essence of what we are in Canada."

"The case of Dr. Khurram Sher is the most perplexing," the Citizen's "analyst," Andrew Duffy, continues. "How is it that he allegedly enlisted in a conspiracy to deliver arms to Afghan insurgents and to plant bombs in Ottawa?"

Khurram helped with earthquake relief in Pakistan in 2006, and in 2007 he signed a petition demanding better care for three men held in prison on security certificates. "Could these events have been among those to shape his worldview?" asks the breathless Duffy. Good Lord.

"Montreal Muslim community closes ranks," screams another hed in the print edition of the Globe and Mail. Surprise, surprise.

This will do nicely:

And your critique is far from an intelligent examination of Islam as you can't seem to do without declaring Muslims members of a fungible group, ignoring the history and contexts of the various Muslims groups that are at issue, and being generally unaware of the relationship between Muslim and non-Muslim groups. In short, you depend entirely on demonizing, ignorance, and hate for your "analysis".

Seems to me you're accusing Jay of racism in relation to a terror issue regarding Jihad and Islam, so...what "race" is Islam again?

Thanks for the links, Todd. Interesting stuff.

"Call me crazy, but I wonder if this is part of Harper's quest to scare Montrealers now?"

Where's Marci McDonald when you need her? :)