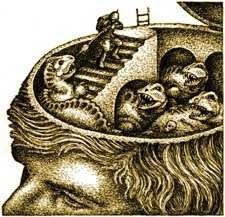 Weighing in on the mini-controversy over Carleton University and its hiring/firing of Hassan Diab, David B. Harris pens an op-ed in today's Ottawa Citizen slamming Carleton for its initial hiring decision.

Who is David B. Harris?

He was once the chief of strategic planning at CSIS. Reading him gives us, I think, some insight into the way CSIS sees the world, and why Canadian citizens like Abousfian Abdelrazik have been hounded and mistreated by this agency.

Harris is the president of something called Democracy House, and a counsel to the infamous Canadian Coalition for Democracies. He is also currently the president of INSIGNIS Strategic Research, where he appears to work as a full-time conspiracy theorist. To get the flavour, as it were, here is a reprint of an article he wrote last year. Here's another, including a claim from his CCD buddy Salim Mansur that the NDP has "gone to bed with Islamists," lengthier blathering of a similar kind from Tarek Fatah, and, for good measure, a swipe at the Ontario Human Rights Commission.

In yet another piece, posted at the CCD website (now taken down), he claimed that terrorists had infiltrated the FBI, the CIA, the State Department, the U.S. Muslim military chaplain corps, the White House, Homeland Security, the U.S. Air Force, Guantanamo, and the Federal Bureau of Prisons--and in Canada, the Ontario Human Rights Commission and the Quebec NDP.

Harris' article today is equally full of sound and fury. Carleton wasn't obliged to offer Diab a contract, he says. The fact that the Department of Sociology and Anthropology did so indicates that Something Is Going On. (Disclosure: I'm a grad student in that department at the moment.)

He raises a couple of hypotheticals: should a professor who is facing charges of having harassed a student be permitted to teach? What about an alleged war criminal? Yet in neither case can the unproven nature of the assertions merely be wished away as Harris would evidently like to do. The overriding question here is, should a mere accusation be sufficient to deny someone the right to a livelihood?

But breezing right by that, he continues on: "Other considerations make this matter curious." [Cue ominous music.] Carleton is inclusive, he says, "to a near-fault." He sneers at the university's website home page for showing six flags, "none of them Canadian, of course." And he introduces us to the loony David Horowitz, who believes that networks of left-wing professors are effectively banning conservatives from teaching, while affecting a mild skepticism: "True or not, it would not seem unheard-of to find personal factors figuring in hiring decisions."

So, the question: why did elite sociologists exert themselves to employ someone in Diab's position? Was this one of those brave, cost-free acts of bourgeois "resistance" and bravura -- a cheap political, moral or other self-regarding statement made on the public tab? Or simply an extraordinary failure of due diligence?

Or was it some of this, and something else?

The "something else," however, quickly proves to be not a terrorist conspiracy, but a suggestion of unfair hiring practices by the department, because Diab's common-law spouse teaches there. And so the article ends, not with a bang but with the flabbiest of conclusions:

[T]his is about issues of administrative and academic ethics, principles, standards and -- especially -- consistency involved in a hiring at a public institution, not about the guilt or otherwise of an individual.

Taken together, these issues have raised questions about the credibility and integrity of the Department of Sociology and Anthropology, and of Carleton University itself. Taxpayers, alumni and parents are owed an explanation.

What was the Ottawa Citizen thinking? It's a topsy-turvy world these days when I have to wander over to the National Post for a breath of sanity.

UPDATE: The Canadian Association of University Teachers weighs in, with a bitter condemnation of Carleton's "blatant disregard of the principles of natural justice and due process, the legal right of an accused to the presumption of innocence, and the responsibility of a university to protect its autonomy from inappropriate outside pressure."
Posted by Dr.Dawg at 12:40 PM