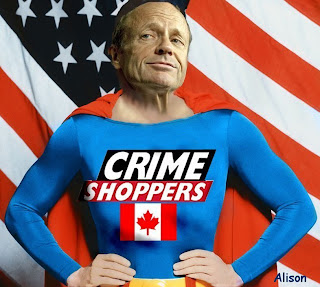 Doris' cheery crime shoppers philosophy on prisons seems to be : If you build them, they will come.

According to Shockwell Doris and JusticeMin Rob Nicholson yesterday, we're going to need more prisons to deal with the "alarming" increase in "unreported crime" ... that was last reported six years ago.

Well, you can see their point, can't you? If more people aren't reporting crimes, then unreported crimes must be going up and we're going to need somewhere to put all them unreported criminals!

And why aren't people reporting those crimes? Via The Jurist :

Statistics Canada reported in their last General Social Survey (GSS) that an estimated 34% of Canadians who are victims of crime still aren't reporting the crime to police, including: - an estimated 88% of sexual assaults; - an estimated 69% of household thefts, and - and (sic) estimated 67% of personal property thefts."

Kady advises us that Doris is basing his claims about unreported crime on the 2004 International Crime Victimization Survey.
Three years ago I had a look at that survey. Here are some of the more buckety questions in it :

Under Spousal violence : "Puts you down or calls you names to make you feel bad"

Under Property Damage : "During the last 12 months did anyone deliberately damage or destroy any property belonging to you or anyone in your houshold, including a window or a fence?"

Meanwhile back in the real world, here's the reported 2004 Statscan crime stats from the year Doris is still bleating about. Yup, going down since 1991. And if I may be so rude as to bring up something a bit more current, like for instance this year's report : crime still going down.

Deal with it, Doris.

Moving the goalposts. Respect has nothing to do with Sn.13, which we were discussing. That was in another country, and besides, the wench is dead.

Respect has always been an anomaly. It was, effectively, a one-man show. And a chimera: Galloway was anti-choice, for example.

And your comments about a phantom alliance with this barbarian in Montreal are plain silly, frankly.