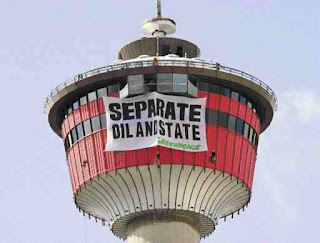 Free speech warrior Ezra Levant figures he has found a way to shut Greenpeace up.
Why prosecute just the kids who hang banners off buildings, asks Ezra over at KoryMedia, when a little lawfare in the form of a novel use of the Criminal Code provides for punishing the Greenpeace senior execs.
First, Greenpeace must be redefined as a "criminal organization" :

A criminal organization is defined as one whose main activity is the “commission of one or more serious offences that, if committed, would likely result in the direct or indirect receipt of a material benefit, including a financial benefit, by the group.”
Break and enter, for example, is considered a “serious offence.”

To be convicted under Section 467.1, the crime organization’s leaders don’t need to know the exact details of the offences being committed, or even the identity of the people involved.

The list of factors for courts to consider includes the repeated use of a name (Greenpeace banners always feature their logo); the receipt of a benefit (Greenpeace always fundraises off their stunts); and repetition of these activities (almost a half-dozen times in the past two years).

Last year Mr. Levant wrote a book of anecdotes detailing the use of such "legal mechanisms as weapons" called Shakedown. But his much-vaunted commitment to free expression has always been curiously one-sided.
(h/t Waterbaby by email)
Posted by Alison at 1:11 AM