Equality before the law comes to California 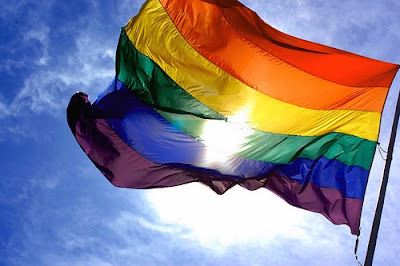 Which alone makes it worth celebrating.
Posted by Dr.Dawg at 5:06 PM

Let's all dance around the grave of western civ, progs and libertarians together.

Poke your finger in the eye of God, go ahead, it will be fun (for as long as it lasts).

Feel good now? End time can't be very close, I mean, where are the signs of it?

So-cons concerns about women and what they do with their bodies usually has more to do with the authoritarian streak in most so-cons that drives them to want to control female behaviour. Wome are tempting men when they dress "provocatively", what ever that means. So-cons of all three religions of the book all think the same on this.
It's bit late for these people to now decry the situation that they helped create in partnership with industry leaders. The religious right have always supported capitalist policies, where did they think it would end up? Their sudden concern for the exploitation of women strikes me as a dollar short and a day late as well as cynically self serving.

As for their dislike of the child protection agencies. Of course they are worried, but their concern is more about somebody interfering with the systemmatic indoctrination of their next generation, rather than any genuine concern for the children concerned. It is all based around what is best for the ideology of the parent and like the example above has only a surface resemblence to genuine caring. I'm pretty sure that the abusers of female children in the M East, Africa, US, Bountiful etc. all really do not want stricter laws protecting children, but it is probably not because it's better for the children.

In the debacle over theism/ atheism some commentators have been calling for the atheist side to try and meet the others half way and to stop ridiculing the superstitious. Sympathetic discussion is the way to go. But how can that be when god supports one side so they can't be wrong.
No sometimes a good piss take is the only way to go.

Dawg can attach weight to the fact that he truly is enjoying the emotion of the moment with out compromising his belief in equality for all under the law. Something which so-cons have sought to deny to some groups for time imemorial.

Your concern trolling is ill-considered because the so-cons you defend enable child and female abuse, but find it wrong only if it's done purely for profit and not because a sky faerie condones it as well.

Another neologism crafted by an idiot, who understands neither concept.

And please stop trying to make us take that vicious little troll seriously. It just makes you look foolish. Trenchant, my butt.

Some of us righties may get some of our own Schadenfreude out of this issue down the road.

"It doesn't get discussed very much, for obvious reasons, but the gay marriage debate has opened ugly fissures in the taken-for-granted gay-black Democratic alliance."

All kinds of groups and individuals oppose gay marriage. So why is it that only one mdash the Catholic Church mdash attracts most of the anger?
No, I don't think Anne Rice hates black people. I just find it fascinating that her irrational fury is sohellip selective. Using liberal logic, Rice should be condemning black Protestant deacons and pastors, too, not just Catholic priests. Taking liberal "logic" even further, Rice's support of gay marriage must mean she's anti-black.
Because that's how their minds work. No wonder so many leftists are in a constant state of fury and frustration. Just look at the many contradictory balls they're obliged to juggle during normal waking hours.
No wonder some of them are driven mad by the attempt."

Liberal support of Shariabolshevism can't go on too much longer either, without the former being devoured. That one should be fun too ....