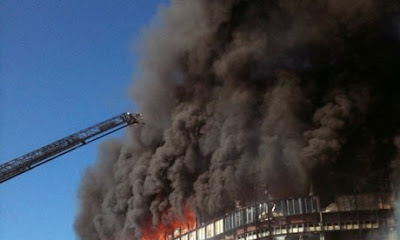 A man flew a small plane into a building near Austin, Texas, housing 190 employees of the Internal Revenue Service:

Initially identified as Joseph Andrew Stack, the pilot, said to be a disgruntled engineer, allegedly left an anti-government note on the Internet before crashing his small plane into the office building that houses the Internal Revenue Service (IRS).

The note outlines problems with the IRS and says violence "is the only answer." It also lashes out on [sic] former president George W. Bush and incumbent President Barack Obama.

But, I am delighted to report, the Austin police have assured us that this was not an act of terrorism.

"No one likes paying taxes," said newly-elected Republican Senator Scott Brown, of Massachusetts. Whew. Had me worried there for a minute.