Proud to be a Canadian? 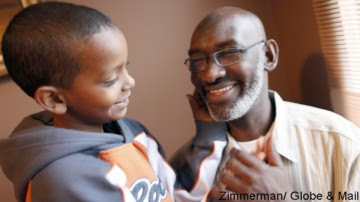 I wonder how Abousfian Abdelrazik feels at the moment.

Abdelrazik is presently suing the Canadian government, which illegally exiled him in Sudan and, thanks to CSIS, exposed him to torture.

And what is the Harper administration's response? After stealing a man's life for six years, and continuing to deny him the right to find employment now that he's back in Canada by court order, the government is calling Abdelrazik's lawsuit "frivolous and vexatious."

Paul Koring, as usual, is all over this:

Even if he was thrown in prison in Sudan at the request of Canadian agents, Abousfian Abdelrazik has no case against the federal government because Canadian law does not protect him overseas, Justice Department lawyers claim.

The government's filings go downhill from there.

One of Abdelrazik's lawyers, Paul Champ, for whom I have a lot of respect, may have been momentarily blinded by illusion: "I expected the government would approach us about an apology and a settlement," he said.

"Instead," he reports, "they have been entirely unrepentant."

But this is Stephen Harper's government, Paul. Canada's New Government, if now somewhat frowsy and shopworn. A government for whom some citizens are more equal than others.

Koring's article includes the background of this case. Go have a read, and remind yourself once again why the Harper regime needs to be tossed on the dustheap of history.
Posted by Dr.Dawg at 11:12 PM

They're one and the same at law: 24. (1) Anyone whose rights or freedoms, as guaranteed by this Charter, have been infringed or denied may apply to a court of competent jurisdiction to obtain such remedy as the court considers appropriate and just in the circumstances.

So if you cite a s.whatever breach and say "we want remedy x" and/or the court orders a remedy, my understanding is that your claim for that breach is spent -- otherwise you could litigate ad infinitum, collecting damages along the way, for the same wrongdoing. You have to find an additional actionable wrong to re-claim, as was the case in the two Khadr cases: first a s.7 breach arising from the fact that the government did not turn over the fruits of its interrogations to Khadr for use in his defence; second, and in the most recent case, for the fact that government agents proceeded with the interrogation of a minor knowing he had been deprived of sleep.

I only wish I were surprised. However, I take solace in my belief that he'll win, and win big. I also look forward with great anticipation to the severe dressing down I expect the judge to give Harper and his cronies.