The General Line of the CPC* 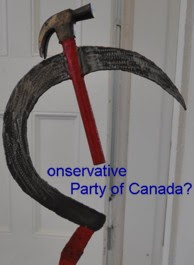 As we all know by now, the zealous rooting out of dissent by the Harper government is a war fought on many fronts. And it conjures up an incongruous memory: the days of strict adherence to the General Line of the Communist Party, and the ceaseless struggle against deviationists, counter-revolutionaries and other enemies of the people. Ironic, one might say.

As in the days of Stalin, the list of enemies grows ever-longer and the Leader is taking the necessary steps to deal with them. The purge of Rights and Democracy is now complete. Officials deemed insufficiently loyal or zealous have been denounced, while others have disappeared or been exiled.

The legislature has become an empty shell, its members sent packing because they were in the way of the Leader and his politburo cabinet. The courts have, perhaps wisely, refrained from curbing the Leader's power. Local Party officials have been stripped of their authority, overruled by the CPC Central Committee. Not even bankers are safe from suspicion that they have been plotting with enemy elements.

The regime rewards its friends while accusing its enemies of a lack of patriotism. The fractured Left Opposition seems incapable of action, and its largest section is frankly collaborationist.

The latest suspects to come under fire are NGOs. "Non-governmental" is a term that seems to grate on the Leader. It suggests areas beyond his grasp, an impression he is now at pains to correct. The defunding of KAIROS is old news by now, although the official line keeps changing. But that was only the beginning.

Keith Fountain, a Conservative who ran in Ottawa-Centre against the NDP's Paul Dewar and came in a poor third, is now an apparatchik working in limousine Conservative Bev Oda's office as a "policy director." He recently warned an aid group: "Be careful about your advocacy."

The person who was chided for his deviationism did not want his name in the media. He was afraid that CIDA funding for his organization's projects might be jeopardized.

That's a concern voiced by some other NGO leaders, who said they have received hints the government dislikes their policy advocacy or criticisms of the government policies, but did not want to be identified.

Most aid organizations, from church-based organizations such as Anglican and Mennonite aid agencies to big agencies such as World Vision, Oxfam and CARE, take public positions on some policy issues, and some organize letter-writing campaigns or publish pamphlets.

The aid groups use CIDA money to finance 75 per cent of specific programs, but don't use it for advocacy.

Some have had veiled warnings about positions that clash with Ottawa's on issues such as climate change, free trade with Colombia, or the Middle East, said Gerry Barr, president of the Canadian Council for International Co-operation, an umbrella group.

“NGOs are being positively invited to remain silent on key questions of public policy,” he said.

But the head of another aid group, Alternatives, has seen the writing on the wall:

Another aid NGO, the left-leaning Montreal-based Alternatives, can't get CIDA to return its calls since the National Post – citing unnamed government sources – reported that the organization's long-standing $2.1-million funding proposal would be rejected because of its political advocacy. Its most recent aid funding ran out last March.

Alternatives produces a newspaper that has published left-wing commentators and, for example, a piece that made a controversial argument for a “united Israel” and against Israel's status as a Jewish state – rather than the internationally endorsed “two-state solution” of Israel existing beside a separate Palestinian state.

“Everything we hear is that Alternatives' advocacy work is the main reason we'll eventually be cut,” said the organization's executive director, Michel Lambert.

In vain does the errant comrade protest his innocence, which in itself, of course, is proof of guilt:

Our views and our work against Islamic and Hindu fundamentalism can be read in hundreds of articles and reports we have been producing since 1992. Whether it is the Taliban or Hamas, we are against their world view and consider them detrimental to any sustainable peace and justice.

How long, wonders the Leader, until this lesson is learned?

*That's Conservative Party of Canada, not these guys.