Parliament resumes: will anyone notice? 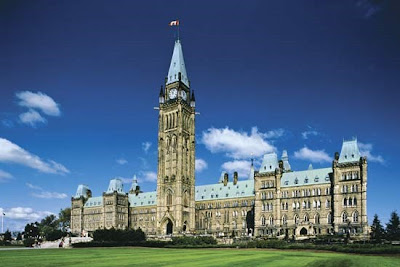 A new Parliament opens with a Throne Speech on March 3. I can't wait.

Two months after MPs last met on Parliament Hill, the House of Commons will once again echo to the characteristic sounds of Question Period....the opposition asking fatuous questions and the government not answering them. [emphasis added]

[T]he engine of government, which has been roaring away like a Rolls Royce during the absence of all honourable members from Ottawa, will return to levels more normally associated with the parliamentary session - that of the average garden lawn mower.

The return of democracy may certainly prove inconvenient, as Ivison fears. It will slow things down, no mistake. The train of government, if I may put it another way, will no longer run on time.

Which, by me, is fine and dandy. So what will the rabble be discussing when the new Parliament kicks off on Wednesday?

Obviously the deficit and how it is to be addressed will be a central theme. The government has been caught between the Scylla of stimulus spending and the Charybdis of tax cuts, and needs opposition support to figure a way out of the mess. The Liberal criticisms have been a mite disingenuous, given that they essentially frogmarched Harper into massive stimulus spending in the last budget, but the government's aversion to taxation is a key part of the problem.

Tax revenues are down because of the recession, of course, and will increase as the economy improves. But Parliamentary Budget Officer Kevin Page warns of a structural deficit--one that will not resolve itself unless something is done. The choice is stark: reduce program spending, or increase taxes, or do both.

We can, then, expect an attack on public service spending, and possibly a go at public service pensions, although my sources tell me that the latter, despite an earlier trial balloon, is not presently on the table. Certainly the unions were girding for battle, and they had right on their side. It wasn't too long ago that the government creamed off a $31 billion surplus from the pension fund, arguing that this was of no consequence because public employees have a defined benefit plan. Now it was being suggested, when the fund showed a deficit because of the recession, that those same employees should pay more into the plan, or move to a defined contribution plan, the norm in the private sector.

This government, like previous Liberal and Progressive Conservative ones, might well have been expected to foster the usual ressentiment against the public service, almost always a popular move. I well recall from my PSAC days the voices screaming for public service cuts and complaining about the deterioration of public services in one breath, but the glaring contradiction never seems to get noticed. In any event, if the pension discussion has been deferred, the same is not the case with program spending. Perhaps the government might want to look at this sort of thing first, but I'm not holding my breath.

According to Ivison, spending priorities will be in the areas of health, safety and national security:

Among [the government's] priorities are: a determination by the Prime Minister to assert Canada's sovereignty in the Arctic and settle the dispute with the United States over the Beaufort Sea; a plan to create a new democratic promotion agency; a strategy for the upcoming G8 and G20 meetings, including Canada's position on the international financial architecture; purchase of the Ambassador Bridge in Windsor; a new Air Passenger Assessment and Security program; a plan to protect critical infrastructure; a national cyber-security plan; a national security statement; and plans to strengthen air cargo security. As part of that package of security measures, Transport Minister John Baird was asked to come up with a strategy to make the Canadian Air Transport Security Authority fiscally sustainable. He did so late on Thursday, getting the bad news out of the way in advance of the Throne Speech and budget, when he announced new fees on travellers to pay for extra security staff and body scanners.

(Anyone pick up on the portion I bolded? It's been good to know you, Rights and Democracy.)

The "war on crime" nonsense will be coming back too, with the opposition being asked to allow the reinstatement of the Conservatives' ideology-driven crime bills, to allow them to proceed where they were when Parliament was prorogued. In the last Parliament the Liberals capitulated in the House over the minimum sentences issue, but showed some mettle in the Senate. Now the Harper government has stuffed the upper chamber with cronies, the ultimate outcome is much less in doubt.

But the bills, in whole or in part, may have to be reintroduced rather than reinstated, at least the way the Liberals and NDP are now talking:

NDP MP Joe Comartin and Liberal MP Dominic LeBlanc both said their parties will review the crime legislation on a bill-by-bill basis.

“The government can no longer pretend that there’s some earth-shattering urgency to pass these,” LeBlanc said. “If the government was sincere about wanting to pass these criminal code changes, they wouldn’t have prorogued parliament and with the stroke of a pen, killed 14 justice bills.” Comartin said it’s likely the NDP won’t support the Conservatives’ grow-op bill.

“The drug bill is one we will likely be doing whatever we can to oppose,” he said. “The likelihood is they won’t get blanket support (for all of them).” But even if some of the government’s crime legislation isn’t reinstated and has to be introduced as new bills, Nicholson said he’s “more confident” they won’t face as many delays in the now Conservative-dominated Senate.

“I’m much more confident now with new committees at the Senate and the appointment of new senators, I have a much better chance of getting that legislation through,” [Justice Minister Rob] Nicholson said.

The Afghanistan detainee issue is also on the boil, and we can expect that the showdown between the government and Parliament over the release of the unredacted Colvin memos will ramp up. The Speaker has yet to rule on a question of privilege raised by the NDP's Paul Dewar, and the Committee examining the matter will be back in session shortly.

We'll also see the re-emergence of a proposed free trade agreement with the narco-state of Colombia, where aboriginal people are being forcibly removed from their lands and their leaders subject to summary execution, and where more trade unionists are assassinated by death squads every year than in the rest of the world combined. Look for shameless Liberal collaboration on this file.

Liberal leader Michael Ignatieff will no doubt continue to grasp for issues--EI reform? Abortion?--with no coherent line of policy yet discernible. He mooted some proposals a couple of weeks ago for restricting the government's power to prorogue, but this one, I confidently predict, will die a-borning.

Ignatieff could introduce a comprehensive package of reforms to address Canada's growing democratic deficit while public interest in the subject is still high, but, as I've noted before, he never misses an opportunity to miss an opportunity. The Liberals, in any case, are most unlikely to propose serious curbs on government power, or to favour electoral reform, when they themselves are hoping to govern in the not-too-distant future with that magic 40% of the vote that virtually guarantees a majority in the House.

NDP priorities are very clear indeed: job creation, addressing the structural deficit (in part by by opposing further corporate tax cuts), and long-overdue pension reform. In addition, given the Harper government's recent unexpected show of sympathy for women and children abroad, the NDP is insisting that the same concern be shown right here at home.

Much to chew on, and those endowed with crystal balls may be able to predict which of the many issues currently in the air might become the hot-button one that triggers the next election. I'm just relieved at this point to see Parliament back, that vast, untidy mass of milling, gesticulating representatives, especially the opposition with their "fatuous questions" trying as best they might to hold the government accountable. Stay awake, Canada. It ain't much, but it's all the democracy we've got.