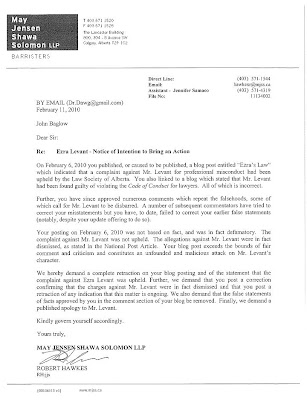 Ezra Levant, the sturdy defender of free speech, has caused the above Notice of Libel to be sent to me for reporting on two recent National Post stories about his recent mandatory conduct advisory ("fireside chat") with the Law Society of Alberta.

I have no intention of putting up a Paypal button and defending this action. Res ipsa loquitur.

1) I retract my claim that a complaint against Ezra Levant was "upheld" by the Law Society of Alberta.

2) On the basis of his attendance at said "fireside chat," the formal complaint was not upheld, and the matter is closed.

4) Comments that have repeated the claim that the complaint was "upheld" have been expunged.

5) I apologize, profusely, for being unaware of the difference between a finding that Ezra Levant had breached various elements of the code of conduct for lawyers--as reported in the National Post--and the formal upholding of a complaint.

I really should go to law school.

PS: Ezra, you're not my friend anymore.

Implicit in the notion of retraction, which was requested, is that you do not republish or continue to publish the defamation. Your actions in merely striking through portions of the defamation and leaving it readable, rather than removing it, suggest an intention to continue defaming Mr. Levant, which gives rise to additional issues.

1) If you do not remove the original post, in its entirety; and

2) Remove all third party comments from your blog that refer to Mr. Levant and the Law Society issue starting from February 6, 2010 up to the present;and confirm that you have done so, by the end of business today, my instructions are to file an Action and proceed against you.

Please also be aware that you will be held responsible for defamatory comments published on your blog on this issue that are authored by others.

I trust you will govern yourself accordingly.[emphases added]

In response, since his lawyer asked so pleasantly, I have removed the struck-through words in my original post, while trying to keep the thing readable. But to demand that I remove NON-defamatory material, and NON-defamatory comments from readers that refer to a matter that has now been the subject of two National Post articles?

Won't happen. Bullies need to be stood up to. Bring it on.
Posted by Dr.Dawg at 5:13 PM