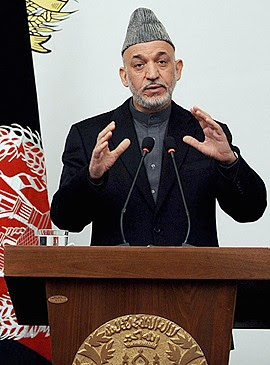 Hamid Karzai, our man in Afghanistan, is embarrassing us again. What should we do about it?

Junior pundit Raphael Alexander is finding the White Man's burden a trifle heavy at the moment, but he's manfully slinging it onto his back once more. In fact he lays bare the imperial thinking that subtler commentators couch in the language of diplomacy:

Any sensible person will immediately condemn Hamid Karzai for even considering such a grotesque piece of legislation, and NATO should essentially force this issue to bed by insinuating non-compliance will lead to withdrawal [which would only be a threat, since we've invested far too much to lose it all on some fourth century legislation] or, more likely, demand his removal. After all, should the Karzai government begin behaving like the Taliban on top of the endemic corruption, they should be removed just like the Taliban.

But unlike the inevitable calls for withdrawal from the morally bankrupt proponents of the left, we should focus on how little political power the government will have to enact this law once the NATO democracies that prop up the government have voiced their opinions. Outrage is correct. It is good, it is moral, and it is imperative. But we achieve nothing by surrendering to the agenda of the gender apartheidists. Freedom and equality has never been won in history without a struggle. Equality between the sexes and races in North America was never won by constitutional enshrinement only. [Emphases added]

It's touching, first of all, to see all this concern for equality from a blogger who believes that certain people can never be Canadians. They're "Canadians", not hyphenated but shudder-quoted:

Amazing how much energies are spent on these “Canadians”. Why, “Abdellah” is as Canadian as Maple Syrup, of course. Vaira, Omar, Bashir, Abdihakim, and Abousfian are also very important Canadians.

But such attitudes do go hand-in-hand with support for our divine mission of civilizing the darkies in other lands. Alexander, in fact, is doing a creditable job channeling Rudyard Kipling:

Take up the White Man's burden--
Send forth the best ye breed--
Go bind your sons to exile
To serve your captives' need;
To wait in heavy harness,
On fluttered folk and wild--
Your new-caught, sullen peoples,
Half-devil and half-child.

But things do not always go well:

Take up the White Man's burden--
The savage wars of peace--
Fill full the mouth of Famine
And bid the sickness cease;
And when your goal is nearest
The end for others sought,
Watch sloth and heathen Folly
Bring all your hopes to nought.

Which of course raises, once again, the subject of Hamid Karzai.

"We are caught in the Catch-22 that the Afghans obviously have the right to write their own laws," Lord Malloch Brown, the foreign secretary for Africa and Asia, told the Guardian newspaper yesterday. "But there is dismay. The rights of women was one of the reasons the U.K. and many in the West threw ourselves into the struggle in Afghanistan. It matters greatly to us and our public opinion."

Some people come to believe their own propaganda, and Lord Malloch Brown is one. "Women's rights" had nothing whatsoever to do with Western intervention in Afghanistan. Were such an issue paramount in our foreign adventures, we might see at least a lessening of US support for its staunch ally in the Arab Peninsula, Saudi Arabia. But somehow we're not throwing ourselves into the struggle, even rhetorically. Women are denied driver's licences, are not permitted to vote or to go out of doors by themselves, are stoned and lashed with a will, and girls are burned alive by religious police, but this sort of thing just never comes up. King Abdullah Bin Abdul Aziz, of course, is nobody's puppet; and he's sitting on an ocean of oil.

So, how are we progressing with the Afghan people and our project to, in Kipling's phrase, "humour [them]...toward the light?" A Canadian diplomat is blunt: "Things are going worse for us than they have during the past four or five years - the Taliban controls more of our territory than before, and we have made no progress at all on corruption." [Emphasis added]

Note the "our territory" slip. That goes with propping up toy governments and slapping them around when they don't rise to our expectations.

All this time, of course, we've been assured by the hawks that we're "making progress" in Afghanistan. Surveys have proven that the Afghans are embracing Western democratic ideals and values (never mind the deference effect). Yet Karzai believes he must bring in mediaeval legislation that legalizes rape--in order to win the next election! Something is obviously not adding up.

Well-meaning attempts to force other people to be good tend to backfire, as is happening now in Afghanistan. The tragedy is that any hope for a made-in-Afghanistan solution to archaic fundamentalism and brutality has been squelched by heavy-handed military intervention, with its thousands of civilian deaths, and political machinations that leave Karzai without sufficient credibility to stay in power unless he enacts Taliban-like measures--a classic bit of counter-reformation, but in reverse.

Meanwhile, our troops are dying. And the question of why grows more unanswerable by the day.