RCMP Commissioner: caught in a lie? 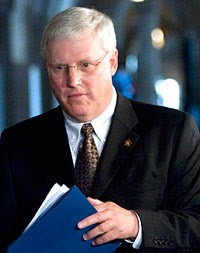 A day after the release of an eyewitness video of the events leading up to Dziekanski's death, the RCMP commissioner called the four officers involved in the incident and expressed his support, according to the partially redacted e-mails.

"I have just now placed calls to all four members. I spoke to three of the four," [William] Elliott wrote in an e-mail dated Nov. 15 to Gary Bass, the RCMP deputy commissioner for the Pacific region.

"I know this is tough on you and all our folks in E Division. Please be assured of my ongoing support," Elliott wrote.

"We will make submissions to the inquiry," said Elliott. "I think it's fair to say that we will say if we had to live life over again, and I'm sure that our members would say – I've never discussed this with them because I've never discussed this incident with them – if they had to live life over again, there are things that they would do differently."