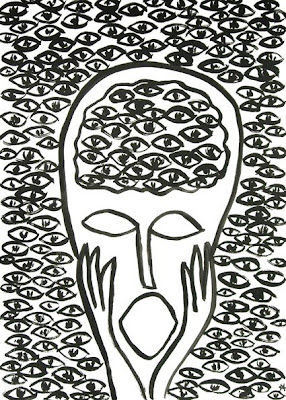 David Frum and David Horowitz have both warned against it, the latter by name. But it's spreading like a summer cold through the murkier parts of the right-wing blogosphere.

The Manchurian Candidate/Muslim/Communist/Anti-Christ riffs are old hat by now, and besides, the world didn't suddenly go dark on January 20. No one's buying that hysteria any more, so at this point the bloodshot gaze of the wingnuts has become focused on matters of somewhat less than apocalyptic import.

Obama's Wife Touched The Queen! (Too informal.) Obama Bowed To The Saudi King! (Too formal.) He should have shaken hands. (See the first sentence in this paragraph). Bush bowed too, but what the heck, he was just receiving a medal. Obama Thinks Austrian Is A Language!* He Gives Bad Gift!

Well, no, I take back my comment about "apocalyptic import." It's just that it can now be discerned in minor matters that most people would miss:

Jamie Glazov, the author of "United in Hate," said Obama's act actually was to be expected.

"And people don't know what's going on here? Are we kidding?" he said. "This is simply the continuation of fellow traveling. It's to be totally expected. Leftists have prostrated themselves before despots throughout history – during the whole Cold War and now vis-à-vis jihadists in the terror war. 'United in Hate' crystallizes with precision how and why this dark process occurs."

He cited the Obamas' less formal interaction with the queen earlier.

"Obviously, the queen does not wield totalitarian power and does not mete out sadistic punishment – with which a believer yearns to identify. The Saudi king, meanwhile, is a tyrannical entity to which Obama can subjugate his individuality – and through which he can vicariously experience a feeling of power and purpose. This is the process of negative identification that every leftist must practice and that 'United in Hate' documents is at the heart of every leftist's main driving force," he said.

Meanwhile Barack Obama is taking on the economy, North Korea, and the myriad of problems, big and small, that cross his desk every hour. I'm no apologist for the politics of the new President, as readers will know, but this ceaseless gutter-level kvetching, this din of spittle-flecked shriekage, tells me two things: 1) Obama's doing maddeningly well in his third month in the presidency; and 2) the wingnuts' fascination with the trivial and the superficial has morphed into a kind of borderline insanity. They're feeding off each other in an ever-expanding folie à plusieurs.

Get a grip, people.

As for me, I promise never to talk about Stephen Harper's hair again. Mea bloody culpa.

___________________
*Austrian is a variant of High German. Whatever the pretentious Mark Steyn thinks, it is not the same German spoken in Germany or in Switzerland, and I'm not even referring here to the many dialects spoken in all three countries. There are vocabulary, pronunciation and grammatical differences. Austrian German, in fact, is recognized as a separate variety of German under international law.

Coming a little closer to earth, it's not inconceivable that someone from south of the border might ask, in an informal manner, "What is a 'soda' in Canadian?" Hardly worth columns of hot air, is it, even if the President is the one asking the question?
Posted by Dr.Dawg at 8:08 PM