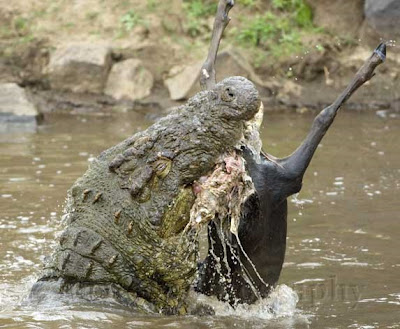 Pouring out a remarkably viscous mixture of irrelevance and self-gratulatory dimestore rhetoric, the racist National Post blogger "Raphael Alexander" (not his real name) takes a poke at me for my remarks about Michael Coren yesterday. It seems that he was urged on by milblogger Mark Collins.

Normally I wouldn't give a damn about anything that the junior chickenhawk has to say, but this is such a glorious example of missing the mental boat that some prominence should be given to it--not for its childlike semblance of argument, mind you, but as a cautionary tale.

Here are the salient bits, dripping, as it were, from my jaws:

Michael Coren was rebuked, heartily, by many bloggers from all over Canada. And that’s where the story could have ended, then and there. But in the words of Torch blogger Mark Collins, a few crocodilian tears spilled by one blogger in particular has necessitated a response. In the blog entry the self-described “progressive” writes:

By now several progressive bloggers have gone after Sun columnist and TV nonentity Michael Coren, who jeers at the notion of women in the armed forces, and exploits the recent death of Trooper Karine Blais to make his point. I have little to add, except to observe that the starboard side of the blogosphere is curiously silent on the matter, The Torch included.

What should be a multilateral attack on Michael Coren for his stunningly inconsiderate remarks, turns into an opportunity for a “progressive” to stick it to the rest of us because, as he observes, our “side” is curiously silent on the matter. What that’s supposed to mean is anyone’s guess. The fact is that when the Torch did get a chance to respond, it did so in an exemplary manner befitting Canada’s best military blog.

Indeed Damian Brooks eventually responded quite capably to Coren's vicious little rant: I noted that, and linked to his post. At that point we were all on the same page. The problem was that the hawkling was holding the book upside down.

See, my post wasn't about Afghanistan at all--not about our doomed mission, not about the steady descent of that puppet-state into corruption, tyranny and misogyny. It was about respect.

It wasn't what Trooper Karine Blais did for a living that caught the eye of progressive bloggers. It was the slimy suggestion that she was an incompetent Barbie doll playing dressup and getting herself killed trying to do a man's job. We would have risen up in exactly the same way if she had been a firefighter perishing in an office tower blaze, or a police officer shot by a fugitive--and some mindless commentator had sneeringly suggested that she was asking for it.

Coren's piece was unconscionable because it used Trooper Blais' death, her body barely cold, to score a cheap and vulgar point. It was an uncalled-for sexist attack on who and what she was as a person and a professional. His support for or opposition to Canada's Afghanistan adventure, and our own, for that matter, are completely irrelevant.

I don't like the monstrous triplex that recently sprang up beside my little house, but if a woman construction worker had died on the job, and a local columnist had mused aloud about her choosing a less manly line of work, I would have been equally up in arms--figuratively speaking. I trust the analogy is obvious, even to the duller sort.

In any case, when I saw post after post going up on the progressive side of the aisle, while at that point nothing had appeared in quarters where one might reasonably have expected it, I found that mildly ironic; so I dropped Collins a line asking the obvious question. I was assured that a response was indeed in the works, and in the meantime he helpfully provided me with a comment from milnet.ca that I reproduced in my post. So far, so good.

But he also said this:

Seeing as most "progessives", yourself included, do not want the CF to be fighting at all in Afstan, I see the reaction as strictly crocodilian.

Which goes to show what a too-narrow focus can do, even to the intelligent. But it also shows where the young chickenhawk is getting it from. To put it bluntly, he's being pimped out by the older and smarter folks, told he's beautiful, and encouraged to put his political ass on the street. The problem is that they're usually nowhere to be found when it gets bitten.

UPDATE: (April 23) "Raphael Alexander" (not his real name) responds: epic flail. Meanwhile, Mark Collins thinks it's all about him.