The Braidwood Chronicles: "You have to have faith in the system" 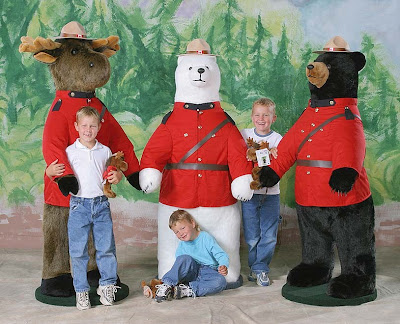 Police testimony at the Braidwood Inquiry continued this week, beginning with the wooden Sgt. Brad Fawcett, back on the stand on Monday, still holding to his line that the Four Horsemen had behaved appropriately at the Vancouver International Airport.

Last Friday, he had stated that their "perceptions" of being in danger were what counted. So it was "reasonable," he said, for the four of them to come at Robert Dziekanski as he backed away, and Taser him five times: and, he continued yesterday, it was "reasonable" for Cpl. Benjamin Robinson to put his knee on the man's neck to restrain him. Not that he--Brad Fawcett--would have acted the same way.

Walter Kosteckyj, a former RCMP officer and now the lawyer for Dziekanski's mother, asked Fawcett (who trains rookie officers in the use of force), if he thought Dziekanski "was showing pain when he was laying on the floor, holding his chest and writhing around in a circle?" Could it be that Dziekanski "was fighting for his life and trying to get air?"

Fawcett, who had had no difficulty earlier determining precisely what was in the minds of the Four Horsemen, suddenly grew cautious. “We can’t put ourselves in the mind of the subject,” he said.

Const. Craig Baltzer of the Delta police department, who downloaded the data from the Taser, followed Sgt. Fawcett. He testified on Monday that the first two Taser shots had been ineffective, although he conceded today that the full effect of the first shot seemed to have been felt--Dziekanski dropped to the floor after receiving it, convulsing in agony. Baltzer's testimony--the language, the tone--was jarringly dispassionate:

"So from that were you determining intermittent contact from the first deployment?" asked commission counsel Patrick McGowan.

The witness video shows Dziekanski drop to the ground after the first deployment. Baltzer was asked about the second deployment.

"On the second deployment as he's gone to the ground and he's starting to curl up you can still hear at the very start of that the loudness of the Taser, but then it goes quieter as there is better contact. You can hear the clack, clack, clack sound but then it sort of shuts off after about one and a half to two seconds into it," Baltzer said.

Baltzer said Dziekanski "appeared to be under the influence of the Taser" with the second deployment.

Baltzer said he could hear no clack-clack noise during the third deployment.

"What does that make you conclude?" McGowan asked.

"That he was under the effect of the Taser," the officer replied.

Today Const. Baltzer agreed that the effect of Taser shocks could lock the limbs so that the subject could not move them as he might wish--his body would simply be out of control. So much, then, for the claim that he was actively resisting the Four Horsemen after being shocked five times in quick succession. It is reasonable to surmise that he was also in a perfect panic after being set upon as he had been.

Interestingly, the actual Taser probes do not appear to have been subjected to forensic analysis to determine if skin contact had been made. Const. Baltzer had to work from accounts and one photograph. He was asked if he had been Tasered himself as part of his training, and indeed he had, with both single and multiple shocks--but for the past three years, he testified, trainees are not actually Tasered. Something to do with work-safe rules!

Then Sgt. Pierre Lemaitre took the stand. He was the RCMP media relations officer who had given a statement of events shortly after the Dziekanski killing that differed markedly from the video evidence and subsequent testimony, and I was all ears. His words at the time were thrown back at him by Commission counsel. "Chairs were flying," he had said. Well, he testified, Cpl. Dale Carr (from the Integrated Homicide Investigation Team) told him they were. "Violence was escalating," he had said; Dziekanski was "still combative" after being Tasered. Well, that was his impression after seeing a bit of the video while being debriefed at the Richmond detachment (where, as it happens, Cpl. Benjamin Robinson was also present).

During the course of the testimony, I actually began to feel for the man, who was entirely professional without being cold and detached. Cpl. Carr, in fact, as became evident, was the conduit through which most information reached Sgt. Lemaitre, whose job it was to relay it to the media and thence to the public. At first I had the impression that Sgt. Lemaitre was sloughing off responsibility, but it soon became apparent that he was more or less at Cpl. Carr's mercy: Carr shortly took over the file completely.

Lemaitre had seen about a minute of the Pritchard video, and drawn some hasty conclusions from it, probably in the context of the information he was being provided at the time. These proved to be wrong; but as for the number of officers involved (four, not three), the number of Taser jolts (five, not two), whether Dziekanski's vital signs were being monitored up until the paramedics arrived, and so on, all of this came through Cpl. Carr.

Lemaitre had been fed what he came to realize was erroneous information, and took quite a few blows to his personal integrity along the way. His frustration became evident over the course of his testimony, and some real emotion eventually began to show as he noted that he had been given other assignments a couple of days after he had provided his media interviews, and then waited in vain for his superiors, and Cpl. Carr, to clear up the inconsistencies.

He had every confidence, he said, that Cpl. Carr and IHIT would correct the record. "You have to have faith in the system," he said.

But it simply didn't happen. He became concerned, as a person with 23 years in uniform, that the truth wasn't coming out, even though IHIT knew that there was considerable misinformation out there in the public realm. He expressed himself on this point to co-workers, friends and family, but somehow didn't feel free to raise it with his superiors.

Lemaitre concluded his lengthy testimony, and asked to say one thing before he left the stand. He offered condolences to Dziekanski's mother, who was not in the room at that moment--and made a point of saying that he was speaking for himself, and not the RCMP.

"We are not spin doctors," he had declared earlier, with emotion. But it looks to me, at least, as though he himself has been the victim of spin. We'll hear from Cpl. Carr tomorrow first thing. It should be interesting.
Posted by Dr.Dawg at 10:23 PM