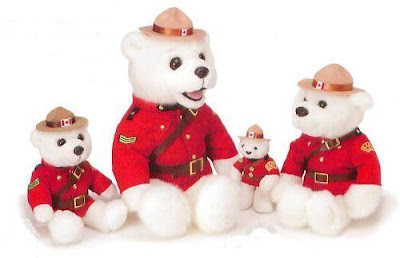 The Braidwood Inquiry continues this week, not quite on schedule but close enough.

Someone has evidently had a little chat with BC attorney general Wally Oppal, who had earlier opened the door to the possibility that the Four Horsemen might be charged. Today he issued a clarification:

Oppal told The Canadian Press he was merely "talking theory," and cautioned that he hasn't seen anything so far that he believes could change the decision on charges.

"All I said is that if new evidence emerges, there's always a possibility to lay charges, but I didn't specifically say in this case it would happen," said Oppal, who has made similar comments in the past.

Oppal said he's "not prepared to buy in" that there was a significant change in evidence and there were false statements made.

RCMP lawyer Jan Brongers claimed yesterday that there was a "perfectly innocent explanation" for the collective hallucination the officers apparently suffered at the airport--four accounts, later recanted, that contained identical "errors." He didn't provide that explanation, however.

A second RCMP mouthpiece, Helen Roberts, lost no time attempting to keep RCMP PR flacks Cpl. Dale Carr and Sgt. Pierre Lemaitre off the stand this week, but Justice Braidwood ruled that they will indeed appear. Sgt. Lemaitre, readers may remember, was the RCMP spokesperson who, immediately after the Dziekanski killing but before the existence of the video became known, announced that only three officers were involved, that a Taser had been used only twice, and that the Vancouver Airport was crowded at the time. I look forward to his examination.

Meanwhile, today we heard from RCMP Cpl. Nycki Basra, who, as a volunteer for the Employee Assistance Program, organized the debriefing session for the Four Horsemen that took place shortly after Dziekanski's death. Previously Constable William Bentley testified that the four of them talked about the killing at that meeting, although Constable Kwesi Millington couldn't remember the subject coming up at the meeting or, for that matter, at any other time, although the four of them worked together for several weeks afterwards.

Trained to listen, Cpl. Basra told the Inquiry that she couldn't remember a thing. "My focus is really on their emotions, their speed of speech and physiological symptoms. Having said that, I don't recall the exact specifics of what was said," she claimed.

Her job, she said, was "to monitor the officers' emotions, provide tissues, water and moral support."

Dziekanski's mother, Zofia Cisowski, was not there to hear any of this. She was at the Vancouver Airport today, laying flowers to mark what would have been her son's 42nd birthday.
Posted by Dr.Dawg at 10:54 PM

This info is worth everyonе's attention. When can I find out more?

My webpage ... how to make money buying and seling cars for profit