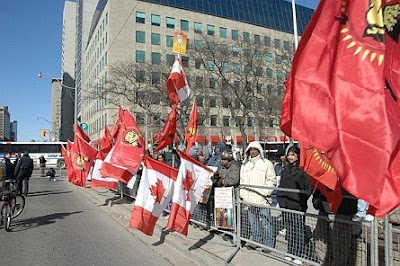 My friend James Bow took me gently to task the other day for calling blogger "Raphael Alexander" (not his real name) a racist in a recent post of mine. It might well not have been constructive, as he suggests. I did, however, provide a link to some unmistakeably xenophobic comments of "Alexander"'s, and I also thought it was germane to a discussion of his tendentious concern for the women of Afghanistan.

In fact, in the post to which I reacted, he merely uses these women as a foil to deride the alleged "hypocrisy" of the Left. Given his previously-stated views about immigrants with funny names, it's not likely he'd welcome these women were they to emigrate here.

And once again he helpfully provides proof so that I don't have to. On the recent mass protests by Tamil Canadians to persuade our government to intervene against the slaughter of their friends and relatives in Sri Lanka, he has this to say:

"Canadians haven’t joined Tamils in their protests in Ottawa. Our absence is symbolic."

By "Canadians," he is evidently referring to those of the reassuringly white, Anglo-Saxon variety. His post is meant to be a rejoinder to an excellent article on the subject by Terry Glavin, and here is the money quote:

Terry Glavin insists that “these are our people, and these are my people”. But they aren’t our people. They are political refugees who have fled from a warzone, and are using Canada as a temporary safe haven. Because we allowed so many of them in to Canada, they now command great political influence in Ottawa, both because of their hardline positions, and their sheer strength in numbers [how can police disperse 30,000 people?]. They don’t care so much about Canada, per se, for as they see it, and every other temporary haven their people dwell in right now, as a staging ground for launching protests that ask for international intervention.

One must marvel at "Alexander"'s wondrous powers of clairvoyance that allow him to determine that all Tamil Canadians are merely temporary residents of Canada, even the second- and third-generation ones who made up the majority of the protesters. His post--its assumptions and the antipathy that it displays--really does speak for itself. Of more interest, however, is his link, to a column by Margaret Wente that lacks the forceful conclusiveness of many of her other pieces, and raises some profoundly important issues.

Tamil Canadians, Wente says (without using shudder-quotes), are asking their fellow-Canadians to join them in their protests. Is this our fight? Wente, an immigrant herself, answers immediately in the negative.

She concedes, however, that this is not cut-and-dried:

In this new, transnational era, issues of identity and politics spill over national borders. And questions of citizenship and belonging become increasingly blurred. Tamil Canadians "belong to more than one nation," says R. Cheran, a Tamil poet and sociology professor at the University of Windsor.

She cites another sociological source, Jeffrey Reitz, to the effect that second-generation visible minorities feel less "Canadian" than their parents, although she doesn't explore his explanation--namely, perceived exclusion. (Reitz, in fact, blames this alienation on the lack of strategies for integration into the wider society, and is critical, as am I, of the strategic value of official multiculturalism, with its lack of goals and objectives.)

Wente's key question, however, is this: is it possible to belong to more than one nation?

There happens, in fact, to be a considerable literature on the subject of citizenship and nationality in this era of globalization. Certainly it is not difficult for us to acknowledge that we can be members of many communities at once, including cyber-communities. And nations, as Benedict Anderson has argued, are fairly new on the scene in historical terms: he calls them "imagined communities."

Nations, like smaller communities, are not bounded wholes. We can feel many loyalties at once, without being caught in contradictions. Citizenship, of course, is another matter: it is legal membership in a specific community of communities, although it is not immediately clear, beyond the legalities, precisely what is the nature of the commitment that this seems to entail.

In any case, Wente ends her column thus:

But the real question for Canada is not about good guys or bad guys - it's to what extent our government will respond to the pressures of transnational ethnic groups, as these groups become ever more influential.

There's another question: How will Canada evolve when so many people have multiple allegiances, to homeland and to host land? "I believe it is possible for people to be loyal to more than one nation, one history and one idea," says Prof. Cheran, who thinks we should embrace the idea of transnational citizenship.

I don't know if he's right, but I do know this. There are many mini-nations in our midst. And most of us don't know anything about them.

In the past, Wente has strayed into "yellow peril" territory, the terrible Other being Muslims these days, but this article, even with the dark suspicion one finds in her tone, is actually a thought-provoking piece that raises many of the right questions.

The "pressures of transnational ethnic groups," once upon a time, might well have referred to those of us of British extraction, given that we were literally British subjects until 1977. All societies, in any case, consist of pressures and counter-pressures, which we in Canada attempt to resolve politically and socially in a civil manner.

Indeed we have always been a country of many nations, including the founding nations of French, English and the First Nations and Inuit who preceded them. How we evolve will be determined, not by imposed policy, but by dialogue; not by law, but by social interaction. And what we are, individually and as a country, cannot, especially in this era of the Internet, be confined by borders of any kind.

Perhaps one way out of the question that Wente poses, then, is to put the word "nation" to one side. Possibly it has outlived its usefulness, and has now become, for all intents and purposes, a floating signifier, referring to many different and contradictory ideas. But, more urgently, if we are to evolve at all, we have to engage each other with passion and depth and, above all, with generosity of spirit. And to do so, it is surely a necessary precondition--indeed perhaps the only one--that we place ourselves well outside the narrow and invidious notion that some Canadians are more Canadian than others.
Posted by Dr.Dawg at 2:42 PM