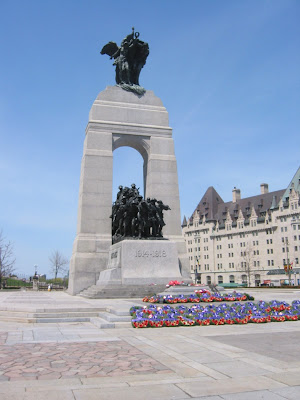 This year is the 60th anniversary of the passage of the Universal Declaration of Human Rights, an international covenant that grew directly out of the world's experience of Nazism. It was an agreement among states that every state is responsible--obligated, in fact--to uphold the human rights of its citizenry.

Here is the Preamble, in full:

Whereas recognition of the inherent dignity and of the equal and inalienable rights of all members of the human family is the foundation of freedom, justice and peace in the world,

Whereas disregard and contempt for human rights have resulted in barbarous acts which have outraged the conscience of mankind, and the advent of a world in which human beings shall enjoy freedom of speech and belief and freedom from fear and want has been proclaimed as the highest aspiration of the common people,

Whereas it is essential, if man is not to be compelled to have recourse, as a last resort, to rebellion against tyranny and oppression, that human rights should be protected by the rule of law,

Whereas it is essential to promote the development of friendly relations between nations,

Whereas the peoples of the United Nations have in the Charter reaffirmed their faith in fundamental human rights, in the dignity and worth of the human person and in the equal rights of men and women and have determined to promote social progress and better standards of life in larger freedom,

Whereas Member States have pledged themselves to achieve, in co-operation with the United Nations, the promotion of universal respect for and observance of human rights and fundamental freedoms,

Whereas a common understanding of these rights and freedoms is of the greatest importance for the full realization of this pledge,

Now, Therefore THE GENERAL ASSEMBLY proclaims THIS UNIVERSAL DECLARATION OF HUMAN RIGHTS as a common standard of achievement for all peoples and all nations, to the end that every individual and every organ of society, keeping this Declaration constantly in mind, shall strive by teaching and education to promote respect for these rights and freedoms and by progressive measures, national and international, to secure their universal and effective recognition and observance, both among the peoples of Member States themselves and among the peoples of territories under their jurisdiction.

In my naivete, I would have thought that marking the end of World War II by laying a wreath to commemorate this important anniversary was a no-brainer. Jennifer Lynch, the Chief Commissioner of the Canadian Human Rights Commission, did so today.

But there was protest--from the Usual Suspects.

The mask appears to have slipped a little too far this time. In fairness, Levant himself has never concealed the fact that he want to abolish Human Rights Commissions outright. The extremist Canadian Coalition for Democracies, of which newly minted Conservative MP Peter Kent is an executive member, echoes this. So does "free speech" advocate Paul Fromm, a prominent Canadian fascist who is a "sustaining member" of the white supremacist Stormfront website, and Marc Lemire, past head of the neo-Nazi Heritage Front.

Most of the other Speech Warriors, however, have presented their fight in narrower terms: they have claimed that their problem is specifically the language and the enforcement of Section 13(1) of the Canadian Human Rights Act, and similar sections of provincial and territorial human rights legislation--the hate speech provisions. They have raised at times heart-rending arguments on behalf of assorted homophobes and neo-Nazis, all based, they have declared, solely on the principle of freedom of speech. I've been prepared, albeit with some degree of scepticism, to accept the bona fides of at least a few of the Warriors in this respect.

But a somewhat wider agenda has now come into view. What is at stake here is human rights, period. The very notion that the head of the Canadian Human Rights Commission should lay a wreath in the name of the human rights that the Allies fought and died for--Nazism standing for the absolute negation of those rights--has got them up in arms. Disgraceful, they whine. It's political, they hiss. But both of these adjectives, it seems to me, far more appropriately belong to them.

My father was a young lieutenant during WWII, heading up the 1st Canadian Calibration Troop. He was at the Falaise Gap, taking refuge in a quarry with several hundred other soldiers as bombs rained down--from American forces, four miles off-target. He lived to tell the tale, and he went on to become a specialist in operations research with the Defence Research Board.

If he were alive to read some of this muck--whether it's the gender fascism in evidence at Dust My Broom or the shrill cacophony of opposition to laying a wreath in commemoration of the Universal Declaration of Human Rights--he would be appalled by it.

Indeed, he might well wonder if 1945 marked the decisive victory that he had believed it to be. "Lest we forget" is the motto that every schoolchild knows: we must remember, not only those who died in battle, but why they fought. But there are those among us for whom forgetting is not only an option, but a priority. Using the excuse of "free speech," they stand against everything my father and his comrades fought for. On this national day of remembrance--shame on them.