Human rights, at home and abroad 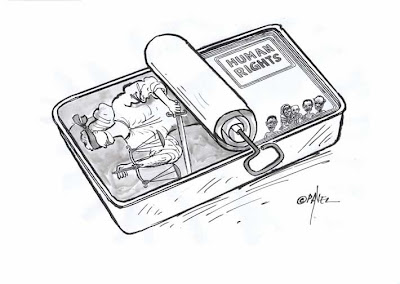 Canada's Speech Warriors™, I suspect, may have woken up with hangovers from last night's victory party. Judging by some of the comments at their sites, many have realized that the Moon report isn't really about repeal of Sn. 13 of the Canadian Human Rights Act at all. Most of the report, in fact, deals with the alternative: tweaking Sn. 13 to make it more efficient and to allow for the screening out of ill-founded complaints.

In addition--and this will hardly be a comfort to the Warriors--Moon calls for not one but two national regulatory agencies, provincial police hate speech teams to monitor the Internet, a snitch line, and, if repeal of Sn.13 is indeed contemplated, changes to the Criminal Code to make prosecution of hate speech easier, and more enforcement of "under-utilized" Criminal Code provisions.

Bask in your victory, folks, and I wish you many more of them.

On the return of Omar Khadr to his country of birth and citizenship, none other than national security expert Wesley Wark has some blunt words about the Conservative position on this matter:

Conservative MPs on the [parliamentary sub-committee on international human rights] laid out the government's case. It consists of a farrago of claims including the idea that the opposition is merely playing politics with the issue, that any Canadian effort to secure the release of Mr. Khadr would reflect badly on Canada's "commitment to impeding global terrorism," and that, in any case, trying Mr. Khadr in a Canadian court would be difficult and unprecedented.

The most gob-smacking of these arguments is the notion that bringing Mr. Khadr home would make Canada look soft on terrorism. Look soft to whom exactly? The unwritten subtext is the United States. Somehow many other countries who argued for and secured the release of their citizens from Guantanamo have not suffered this label, Britain and Australia foremost among them.

The Conservative policy has hit a realpolitik wall. The United States has a new president-elect, Barack Obama, who has committed his government, repeatedly, to the closing down of Guantanamo Bay. Even if this promise is delayed in its execution, the trial of Omar Khadr will never lead anywhere; its wheels will come off, just as so many others are doing at Guantanamo Bay.

Check out the whole article.

The dogged Paul Koring, meanwhile, has more on the disgraceful treatment of another of our citizens, Abousfian Abdelrazik, currently marooned in Sudan. The sleazy officials running Foreign Affairs, it is now revealed, denied consular assistance to Abdelrazik when he was being led off for interrogation by Sudanese police and the FBI, the latter telling the terrified captive that he would never see Canada again if he didn't "fully cooperate." Specifically, Sean Robertson, whom I have mentioned before, gave explicit orders that this Canadian be left on his own: "Mission staff should not accompany Abdelrazik to his interview with the FBI," he commanded.

The continuing pattern of deceit by Foreign Affairs--and a dreary tale of moral corruption it has proven to be--is not merely a matter of some rogue officials doing their thing. The Harper government has been in this up to its eyeballs: Koring has repeatedly shown that it is fully in the loop.

The secret documents that Koring got his hands on reveal that "senior officials" have advised the government that Abdelrazik has every right to come back to his country, and that there is no evidence linking him to terrorist activity. But, as Abdelrazik's lawyer notes, "there is some kind of complicity between the Canadian and the American security and intelligence authorities.... [T]he Harper government would rather bow to pressure from the Americans than do the right thing."