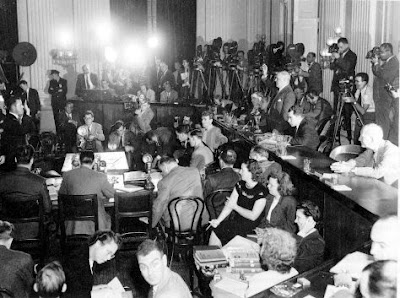 Antisemitism represents a break from Canadian values, which promote the rights of all individuals to practice their religion, educate themselves, and express themselves with security and freedom. --CPCCA

With a flourish of trumpets, the portentously-named All-Party Canadian Parliamentary Coalition to Combat Antisemitism has begun its hearings. And by no coincidence an op-ed piece appeared in the Ottawa Citizen today, warning of the return of the "beast of anti-Semitism," written by one of the Coalition's scheduled first witnesses.

There has never been a fancy-dancy Parliamentary Coalition to investigate anti-gay prejudice, sometimes fatal. Nor does anti-Black or anti-Asian discrimination warrant so much as a passing glance. Ditto for the scrofulous anti-Aboriginal bigotry that is virtually a hallmark of far-right blogs today, and evidently extends into the government itself.

Nope. Only one group in the entire country warrants a House Un-Canadian Activities Committee, complete with hearings across the country. I already posted about this miserable little witch-hunt back in July, while it was unaccountably not deemed important enough to be mentioned by the mainstream media. Better late than never.

If real anti-Semitism were being investigated, I'd have far fewer problems with this, although a question would remain in my mind why Canadian Jews, hardly alone in facing discrimination and hate crimes in this country, were being singled out. But by all means go after the Holocaust-deniers, the graveyard vandals and the schoolburners, although I thought we had laws, courts and police to deal with that sort of thing.

[Anti-Semitism remains] a real threat...though I should have thought a diminished one. ... Of course, the position of the State of Israel in the turbulent events in the Middle East has brought out different critics who are also sometimes accused of being anti-Semites. Doubtless some of them are, but there are others who are critical of Israel on grounds that have little or nothing to do with religious intolerance.

One might say much the same with regard to Canada's Muslim population. This difficult situation is rendered more complex by considerations of race and colour, but some of the indignation on the part of other Canadians clearly relates to unacceptable, violent behaviour outside Canada. The two should not be confused, just as evidence of violence or potential for violence on the part of some Muslims should not be generalized to the Muslim community as a whole.

In any case, the problem is, and anyone who's been around the block more than once knows this, that the word "anti-Semitism" has lost its original meaning almost entirely, and become code for criticism of Israel and too-vocal support for the Palestinian people. The Coalition itself, in fact, has already telegraphed its intent and its conclusions:

While accusations of blood libel, or petty vandalism are still issues for the Jewish community, new fears have arisen especially for those who support the State of Israel. On campuses specifically, Jewish students are being threatened and intimidated to the point that they are not able to express themselves, or are even fearful to wear a Jewish skull cap or star around their necks. [emphasis added]

Let's have the evidence for these very serious charges, or is it too late to request it now that the Coalition has already accepted the claims in advance of its hearings?

Talk about "new fears" to the folks at Carleton University, whose President intervened earlier this year to stifle debate about the Middle East, and sent out veiled threats from her office to every student at the place, including me, to watch our mouths when we talk about Israel. And then fired a professor, Hassan Diab, hours after B'nai Brith complained about him. (His department protested, and for its pains was collectively tarred with the anti-Semitic brush by senior Ottawa Citizen journalist Andrew Potter: "it is hard to interpret the slur against Jews as anything but entirely deliberate."

Lots of intimidation there for sure, but not against Jews.

Of course, we're getting the usual vague assurances about "legitimate criticism of the state of Israel" being allowed:

No examples of such "legitimate criticism" are ever given, of course. The phrase has inevitably been used as a foil to target alleged illegitimate criticism. And all criticism of Israel seems to fall into the latter category. Here, for example, is what a senior B'nai Brith operative had to say when I criticized Irwin Cotler's publicly-stated pride that his children had signed up with the Israel Defence Forces, given the IDF's dismal human rights record in the West Bank and Gaza:

"Are we not permitted to question a senior Canadian politician's publicly expressed pride that his children have signed up with an armed force that has brutalized the West Bank population for years and recently committed war crimes in Gaza?"

You're an antisemitic asshole.

"Anti-Semitic," once clearly defined, now a floating signifier, at this point can mean anything the accusers want it to mean, like the epithet "Communist" when Joe McCarthy and HUAC were in full swing.

Well, welcome back, Joe. The House Un-Canadian Activities Committee is now well-launched, and will be coming soon to a public pillory near you.

[p]because Tiffany jewellery is whatsoever instances priced huge to go with with its unbeatable beneficial quality and elegance, [url=http://www.allkindsjewelry.co.uk]jewelry sale[/url] relatively many different people just adore it so a good offer and wonder is there any place for much less pricey one . 隆掳The luxury goods industry is a silent struggle with the high-tech [url=http://www.pandorajewellery4sale.co.uk]Pandora Jewellery[/url] industry . There are various look-alike tiffany jewelries in this internet site, arrive and get a Tiffany Wedding band in order to express a person隆炉s heart and soul for your [url=http://www.pandorajewellery4sale.co.uk]pandora jewellery sale[/url] special someone . And if you at any time experience anyone using the specific same dress, your artwork operate will outshine every sole [url=http://www.pandoraringssale.co.uk]pandora rings sale[/url] real person else's jewelry . It are heading to be the normal for [url=http://www.nicejewelryuk.co.uk]cheap jewelry[/url] exceptional effects . Mary Christensen 篓C back in Iowa that May 20 years ago 篓C figured that in the confusion of the security [url=http://www.nicejewelryuk.co.uk]fashion jewelry[/url] check, a guard must have mistakenly put the tiffany charm brace into her bag instead of handing it to its owner . Once mention the renowned sterling [url=http://www.allkindsjewelry.co.uk]Tiffany Bracelets[/url] silver jewelries, we naturally have Tiffany jewellery in our mind . President Lincoln later bought his wife, Mary Todd Lincoln, a seed pearl jewelry suite from [url=http://www.pandoracharms4uk.co.uk]pandora charms[/url] Tiffany隆炉s . Whilst including Tiffany nylon uppers wedding band, Tiffany 1837 selection pillow bands, are usually a person隆炉s very good selections.[/p]

I am not in a position to see this website correctly on my
cellphone :(

my web page having trouble getting pregnant