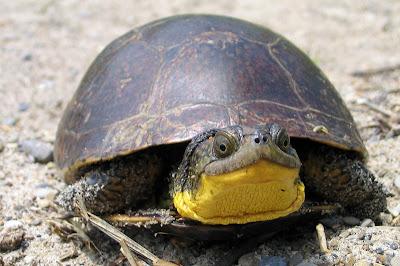 A tale from Kanata, at the western reach of the Ottawa megacity: why not grab some federal and provincial stimulus funds and run a road through wetlands and woodlands?

A Kanata road project that could severely harm several protected species of plants and animals is being fast-tracked so the city can get millions of dollars from short-lived economic stimulus programs to help build it.

The project is an extension of Terry Fox Drive north of Highway 417, taking it four kilometres through woods and wetlands. The city is due to get $32 million in federal and provincial money to help pay for the work, but because the funding programs are meant to push money into the economy quickly to help the country and province recover from the recession, the road needs to be finished by March 2011.

If it goes ahead as planned, the new road will kill the resident population of the threatened Blanding’s turtle — an animal that is supposed to be protected by federal and provincial endangered species laws — says the lead turtle scientist with the Committee on the Status of Endangered Wildlife in Canada.

According to a draft environmental assessment screening report, prepared for the city by Dillon Consulting, the Terry Fox Drive extension will cut directly through a swampy area identified as “Vernal Pool 14+600,” which teems with wildlife and forms “critical habitat” for the Blanding’s turtle, as well as breeding habitat for sensitive amphibians.

“Filling in this large vernal pool/wetland will result in the direct loss of 0.69 ha of amphibian breeding habitat, fragmentation of the habitat and the probable displacement of area-sensitive, pollution intolerant herpetofauna as well as other potential wildlife species,” the report states.

One of the problems all along with the stimulus measures has been the encouragement of this sort of hurried project with its attendant hasty and inadequate planning. Because there will be no further federal or provincial funding for projects left incomplete after March 2011, corners are being furiously cut.

There's no time in this case, for example, to do the up to two-year assessment of the migration and hibernation sites of the Blanding's turtles in the area, considered essential by turtle expert Brad Steinberg of the Ontario Ministry of Natural Resources. Ripping up the forests and laying down asphalt for more cars and more development is the priority for the City of Ottawa, and wildlife, even endangered wildlife, be damned.

I support fiscal stimulus when we're in recession--it makes good sense. But surely some measures could have been put in place to approve only those projects that meet all of the appropriate criteria at the outset, including unrushed environmental impact studies.

As a coda, the print version of the Ottawa Citizen reveals an internal memo with a possibly telling comment:

"Are we saying that wildlife populations would decrease?" Biologist Shawn Taylor responds: "Yes, it's likely that the populations would decrease (many birds, deer, porcupine, fisher, turtles, salamanders, wood frogs all need internal forest conditions), but as above, rather than saying this is a significant cumulative effect we are softening the blow so it is approvable. Shawn."

A city manager insists that "softening the blow" refers not to spin but to proposed mitigation measures, already branded inadequate by the Committee on the Status of Endangered Wildlife in Canada. One way or the other, it looks like lights out for the Blanding's turtle in these parts.
Posted by Dr.Dawg at 12:11 PM