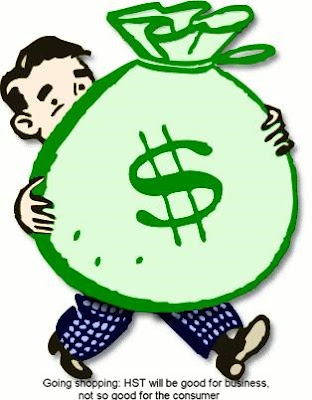 That's what the federal Liberal leader Michael Ignatieff is calling the Harmonized Sales Tax, at least for now--while fellow Liberal Dalton McGuinty is gung-ho to introduce it here in Ontario. But by the Spring, who knows? Ignatieff isn't a leader, he's a weather-vane, and business is blowing strongly on this one. Besides, John McCallum, his finance critic, has stated plainly that the Liberals actually support this regressive tax measure, thus creating plenty of space around the leader for his now-characteristic bobbing and weaving.

Bluntly stated, the HST, like the GST and the PST, is an abomination. All of these consumption taxes are wealth redistribution schemes, but from the poor to the rich. They undermine the very nature of a progressive graduated income tax, which (at least in principle) is based upon ability to pay. Instead they are regressive flat taxes, applied equally to the rich and to those of modest income, eating up proportionately more of the latter's resources.

Introducing this pro-business tax in Ontario will lead to an immediate jump in the cost of living. Not all businesses agree with the measure, either: realtors are worried that a hike from 5% to 13% tax on real-estate transactions will have a bad effect on their profits. The classic response to someone named "Sherlock" is warranted here.

Boadway says the current two-tiered system of a 5% federal GST and 8% provincial sales tax is unfair, inefficient and hurts the competitiveness of Ontario companies.

"A broad-based tax is the fairest tax because it doesn't discriminate between the things consumers purchase," he said.

"If you buy an auto, a TV or some other consumer durable you pay a substantial sales tax" but if you buy services exempted from the PST, you don't. That, he says, is unfair to consumers.

Uh-huh. By analogy, the way to deal with schoolyard bullying is to ensure that the bully delivers the exact-same punishment to everyone.

Other advantages to adopting the HST he points to:

* It could allow the government to reduce taxes. "If a tax is broad-based, you can get the same revenue with a lower tax rate," he says.

* A single blended tax would reduce costs and duplication of effort; with the HST administered by Revenue Canada (as the current GST is) a provincial agency would not be needed.

Governments will now have the ability to reduce taxes. But the Ontario Premier who broke his own promise by introducing expensive health care premiums as soon as he lurched into office is likely to resist that particular temptation.

The second point seems initially attractive. Who wouldn't jump at the chance of dumping an entire provincial agency? But we have no figures to help us here. What savings per Ontarian would be realized by doing that, and how would it offset the rise in everyday expenditures by the average citizen of this province?

The pro-HST argument most frequently heard it that it will somehow save businesses millions by eliminating the alleged expenses they incur in administering two tax systems instead of one. One has the image of furiously scribbling clerks atop high stools, quill pens in hand. What ingenuity does it take to program a computer to keep track? This is 2009, not 1809. Tell us more about these "expenses" under the weight of which Ontario's business sector is presently groaning.

But businesses do like to groan, and governments always rush for the cold compresses and smelling salts when they hear the unlovely sound.

A practical alternative, rather than taxing already-taxed money earned by working people? Increase the personal income tax. (We'll leave corporate tax in parentheses for now, if only to keep the discussion on-track.) Think there's likely to be a tax revolt if citizens were told that their income tax was going to rise by a point or two* in graduated fashion, but that the GST and PST would be abolished in return? We pay income taxes once a year. We pay the other taxes every day.

One final note. I'm not anti-tax. I pay taxes willingly, and I believe in government support of social programmes (if only they'd do more of it). But fair taxes are the issue here. The notion of ability to pay has been around for some time. Flat taxes are inimical to this concept. The HST and its predecessors effectively tax the poor, if not the very poor (the latter qualify for tax credit relief), while the rich barely feel a thing.

The HST proposal places me on the same side of things as the Canadian Taxpayer Federation, and on the opposite side of the fence from progressive economist and former USWA heavyweight Hugh MacKenzie, a long-time supporter of public spending as an economic stimulus, and from some anti-poverty activists, if with qualifications.

That's embarrassing. But for the life of me, I don't understand why opposition to flat taxes is being so easily equated by some with opposing taxes per se. My own politics place me in opposition to tax cuts--I'd like to see tax increases, in fact, to pay for badly-needed social programmes. But why the gusto for raising the revenue in such a patently unfair manner?

Here is Mackenzie, who thinks that consumption taxes are "a pretty good way to pay for public services":

I also think it is nonsensical for the left to come out in opposition to tax increases. I have yet to hear a coherent explanation as to how a party of the left is going to benefit long-term from stoking up opposition to taxes. We should have learned our lesson over the GST campaign, the main beneficiary of which was Preston Manning.

The straw men in this statement should be torched. Who on the left opposes tax increases for public services? But why is doing this through personal income tax never mentioned, in favour of a tax that benefits the already well-off?

The floor is open.

[Declaration of interest: I presently charge my consulting clients the 5% GST. If McGuinty gets his way, that amount will have to rise to 13% HST. Yes, my ox is threatened with a goring. But so is yours, every time you go out for a meal, travel by air or get a haircut, to name but three of the many services that will be subject to the new tax.]

*UPDATE: Reader "Punch My Ticket" correctly points out that more than a "point or two" would be involved. But the argument remains: taking less revenue through income tax and more from a regressive consumption tax means shifting the tax burden away from the rich onto the middle class and the working poor. Why progressives would support this remains a mystery to me.