Standing up to the bullies 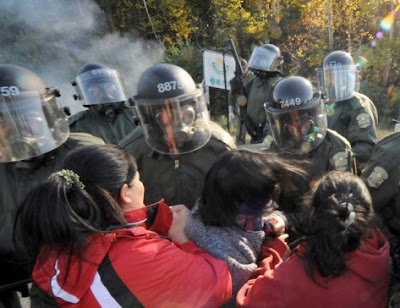 As someone who has frequently been "righteous on street cops," I've been following the Henry Gates saga out of the corner of my eye, imagining that the narrative would have a clean finish.

Overbearing police officer, drunk on authority, muscles a semi-handicapped older Black man around on his own property, makes a bogus arrest, and then discovers that his target is simply swimming in social and cultural capital, to the point that the President of the United States weighs in on his side. Uh-oh.

And good for Henry Gates for standing up for himself.

Whoa, not so fast.

The Uncle Toms are emerging. Here's Mansfield Frazier of the Daily Beast:

Sure, and why not do a buck-and-wing and holler "Yowza" while you're at it.

Cops will lock up anyone who continues to mouth off, be they black or white. Gates should have kept his cool and addressed his concerns in another, calmer, manner. His position at Harvard ensures that he would have been heard—much more so than the average black man. He had access to redress that other blacks lack.

And here's a senior editor of Mother Jones, if you can believe it--a white man giving the bla' folks the benefit of his advice:

You don't talk back to the police. You don't question them. And you certainly don't call them racist, even if you think they're profiling you. (And they most likely are.)

Because you will lose. It doesn't matter whether you're a prominent black Harvard prof, a white kid on his way to attend graduate school or a Hispanic high-school dropout. I understand the indignation of Henry Louis Gates Jr., the Harvard prof arrested last week on disorderly conduct charges, which were dropped after an officer established that Mr. Gates had not broken into his own Cambridge, Mass., home. Mr. Gates, however, has clout in the Cambridge community, and he could have brought his complaints straight to the brass or to local politicians. (And speaking of clout, even Barack Obama weighed in on the Gates case during a White House news conference on Wednesday – he accused the police of acting “stupidly.”)

But get righteous on a street cop and you will lose every single time. Henry Gates should have known as much.

Luckily for Blacks in America, Martin Luther King didn't take this well-meaning counsel. He didn't cuss the cops out, but he didn't take any guff from them either. Nor did the Black Panthers, guns in hand, standing up to the local rednecks. After all this time, I still like Bobby Seale and his brash prose. Here is his description of Huey Newton in the early days:

Huey P. Newton, Minister of Defense of the Black Panther Party, the baddest motherfucker ever to set foot in history. Huey P. Newton, the brother, black man, a nigger, the descendant of slaves, who stood up in the heart of the ghetto, at night, in alleys, confronted by racist pigs with guns and said: "My name is Huey P. Newton. I'm the Minister of Defense of the Black Panther Party. I'm standing on my constitutional rights. I'm not going to allow you to brutalize me. I'm going to stop you from brutalizing my people. You got your gun, pig, I got mine. If you shoot at me, I'm shooting back.

Never mind what happened much later to the Black Panther Party. Like many revolutionary organizations, it fell apart, assisted in this case by COINTELPRO. But the message is clear, and it's the one our parents told us: stand up to the bullies.

It is entirely true that police forces are largely unaccountable to the communities that they are sworn to serve and protect. The accountability mechanisms aren't there because they are stoutly resisted by the police themselves and their friends in politics. So communities have been forced to build their own grassroots accountability mechanisms--in Ottawa, the Ottawa Witness Group observes, records and reports on police behaviour at demonstrations; there's the Toronto Police Accountability Coalition; and in Vancouver, there's PIVOT.

But it is on an individual level that we must begin. Police officers, far too often, expect automatic deference to their authority, even when it is exercised inappropriately or illegally. They bluff and bluster and think nobody knows their rights. It's salutary to see what happens when they meet people who do. An exchange, at a "Public Service Appreciation Week" event held in a tent on Ottawa's LeBreton Flats during a period of tense public service collective bargaining:

Picketer: What law are we breaking?

Picketer: Well, officer, you know that only the owner of a property can initiate a trespassing complaint.

Picketer: Fine, then. We'll just proceed until you hear back.

Picketer: Are we under arrest?

Of course you have to be strategic--you don't walk into a police station and mouth off (although I've done so and left unscathed). You don't take on riot cops in full gear. But simply accept bullying, tug our forelocks and suck it up?

No one should do that, black or white or any other colour. Because if we accept the advice quoted earlier, nothing will ever, ever change. The bullies will rule the communities, and social hierarchies will continue to be brutally enforced.

The secret of change? Know your rights. And give them plenty of fresh air and exercise.

UPPERDATE: (July 26) It seems that the "outstanding officer" in the case, Sgt. James Crowley, might have some 'splainin' to do. Should have stuck with your gut, Obama. [H/t LuLu]