"I just want to live my life like a normal Canadian" 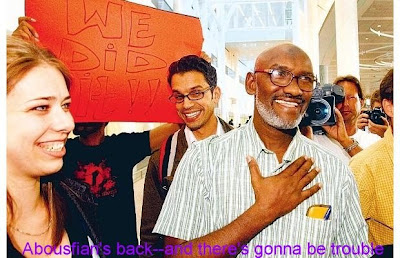 Abousfian Abdelrazik held his first press conference this morning, on Parliament Hill, appropriately enough. The story he told is a chilling one, with CSIS, Foreign Affairs officials and the Conservative government front and centre.

Calling CSIS "Canada's Mukhābarāt," he described what life was like for him in Montreal immediately following 9/11. CSIS agents began to hound him and his family, going so far as to pester his wife in hospital, where she was dying of cancer. They offered her "better cancer treatment in the US" if she would cooperate in their investigation of Abdelrazik. She told them that if they had any evidence that he'd done anything wrong, they should charge him.

When he received news that his mother was ill in Sudan, he decided to visit her, partly, he said, to get away from relentless CSIS persecution. Two CSIS agents came to his apartment for one last visit, asking him where he was off to, and then answering their own question--Sudan.

The exasperated Abdelrazik called the police to remove the agents from his premises. One told him, "You will see."

He arrived in Sudan on March 4, 2003. He visited his family and everything seemed normal, he said. Then he was kidnapped by Sudanese military intelligence, and kept in a tiny cell for 12 days, during which time no one asked him anything at all. Then he was brought out for interrogation.

He was asked questions by the Sudanese, not about Sudan, but about people in Montreal. He spent the next few months in prison. In October, 2003, he was brought into a room with two CSIS agents, one of whom had visited his apartment in Montreal, who said, "Remember I told you in Montreal you will see, and now you will see."

He underwent two days of interrogation, during which time the same questions were asked as the ones put to him earlier by the Sudanese. He said he wanted to rejoin his family in Canada. "You're Sudanese, not Canadian," one of the agents said. "My country doesn't need you." He told the agents he was willing to face any charges they might wish to bring. The response: "Sudan will be your Guantanamo."

He was returned to prison, and the real torture started: beatings, being tied to the door-frame of his cell, months of isolation. By the end of March, 2004, he had reached his limit, as he put it, pleading to have a lawyer and be brought to trial. There will be no lawyer and no trial, he was told, and if he didn't shut his mouth there would be "difficulties." He was released from this first period of detention in July, 2004.

At that point he was desperate to get back to Canada, but a consular official told him, "Why? Sudan is your country."

In November 2005, he was contacted by Sudanese military intelligence, who said they had received some documents from Canada and would appreciate having a chat with him. Abdelrazik stopped by the Canadian Embassy and spoke with the Ambassador, saying he didn't want to be re-arrested and sent to jail again. The Ambassador said he had been given assurances that this would not happen, but of course it did. He was able to call the Ambassador to let him know, before his cellphone was taken away

Nine more months of confinement followed, in a prison notorious even in Sudan as a place where people are simply forgotten about. He was beaten with a hose, tied up, and contracted both malaria and typhoid: in a marvellous bit of understatement, he said that at this point he was suffering "depression."

In July, 2006, he was released from prison for the second time. The Sudanese, who had, it seems, been holding him on CSIS' say-so, were no longer convinced he was guilty of anything.

He spent the next three years trying to return to Canada.

In March, 2008, he met Conservative MP Deepak Obhrai in the Canadian Embassy, who proceeded to interrogate him about links with Osama bin Laden, and what he thought about 9/11, and his opinions of Israel and Hamas. He was told that he wouldn't get any assistance if he didn't cooperate. He showed Obhrai scars from his torture, and was amazed: Obhrai showed absolutely no reaction and walked away.

A month later, Abdelrazik decided to go public. Given that his mistreatment at the hands of the Sudanese would be a significant part of his story, his lawyers in Canada advised him to seek refuge at the Canadian Embassy, which he did. "It felt like another prison," he said.

Answering questions after his statement, Abdelrazik said that "physically, I am here, but I'm still on the list: I can't get a job, receive medical care, can't even receive a small gift from my own family."

"I just want to live my life like a normal person, a normal human being, a normal Canadian."

There's some way to go yet, I think. Some long way to go.

Foreign Minister Lawrence Cannon, in a letter delivered Thursday, told Mr. Abdelrazik to check out a UN website that explains delisting procedures for individuals. “I regret to inform you that I must decline your invitation to meet,” the minister wrote. [emphasis added]

It was Mr. Cannon who labelled Mr. Abdelrazik a threat to national security, in spite of the fact that he had been cleared by CSIS and the RCMP. Mr. Cannon made no mention of the fact that the Harper government had already sought – in December of 2007 – to have Mr. Abdelrazik delisted after the security agencies said they had knew of no reason not to back the request.

That delisting application was vetoed, apparently by the United States, which originally put him on the blacklist.

Although individuals can apply for “delisting,” only governments can add people to the terrorist blacklist, and unless all 15 members of the Security Council agree to a delisting, it is denied. UN sources confirm that no one has ever been delisted without the backing of their government.

Let the Black man twist in the wind a little longer, eh, Minister? This song is dedicated to you--and to your type.