Abousfian Abdelrazik: "You want we should take care of him, Boss?" 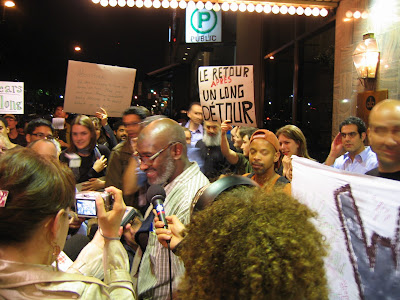 Abousfian Abdelrazik is back in Canada. But new revelations about the government's dubious handling of his case have been unearthed by the Globe & Mail's indefatigable Paul Koring. Briefly, the Sudanese government was considering "disappearing" Abdelrazik in 2006--and Canadian diplomats in Khartoum were ordered to take no action.

The Sudanese, having apprehended Abdelrazik on the say-so of Canadian intelligence, wanted closure. If Canada was not going to repatriate him, it informed Canadian officials in early 2006, it would carry out its own "permanent solution."

Instead of protesting the threat or warning Sudan – a regime notorious for its human rights abuses – that Ottawa would hold it responsible if harm came to a Canadian citizen held in one of its prisons, diplomats in Khartoum were ordered by a senior Canadian intelligence official to deliver a non-committal response "notwithstanding the expected displeasure of the Sudanese."

The warning of Abdelrazik's imminent "disappearance," from Canada's top diplomat in Khartoum (presumably the Ambassador at the time, Yves Boulanger), was met with a "take no action" memo from John Di Gangi, then DFAIT's director of foreign intelligence. "You should restate our position and make no further comment," he said.

If this wasn't green-lighting, it was the next thing to it. And this was before Abdelrazik's name had been placed on the UN "no-fly" list at the behest of the Bush administration.

It is unclear, Koring says, whether then-Minister of Foreign Affairs Peter McKay was apprised of this threat: he declined to answer written questions from the Globe and Mail. According to Amnesty International's Alex Neve, however, "One of the key recommendations from the Arar inquiry was that the minister of foreign affairs should become involved in decision-making when there are credible reasons to believe a Canadian is being or has been tortured abroad."

Paul Champ, a lawyer working pro bono on the Abdelrazik case, sums up the attitude of the government:

Canada's tepid reaction can only be described as shocking. This case exemplifies how morally confused Canadian authorities have become in the wake of 9/11. Somehow, human rights have become viewed as an inconvenience, not a legal obligation.

And in this instance, Canada was prepared to resolve the "inconvenience" by permitting, without protest, one of its own citizens to be murdered.