Sunset for the RCMP. 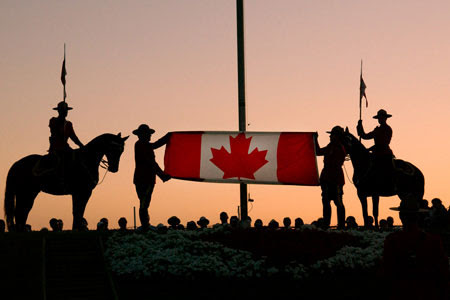 This is the letter that Dr Webster wrote to Zofia Cisowski (Robert Dziekanski 's mother) published in the Globe and Mail.
While not 'le coup de grâce' to the RCMP that some might wish, Dr Webster's letter may well signal the tipping point, "the level at which the momentum for change becomes unstoppable", as defined by Malcolm Gladwell in his book, refining the expression as a sociological term: "the moment of critical mass, the threshold, the boiling point."
Today Gary Mason, a journalist at the Globe and Mail, adds his own perspective. The thirteen comments that follow his article express agreement with the points presented by Dr Webster.
The fourteenth comment is from Mason Wright, Globe and Mail evening news editor, apologizing for closing the comments section, citing 'legal reasons.'

The members of the toxic executive inner circle of the RCMP will not go quietly. They have demonstrated that they are willing to hold public safety in fealty to their imperatives, and the public hostage to their collective arrogance.
Posted by Marie Ève at 12:30 PM

Djelloul: The Mafia has been portrayed in many ways in books and movies, and I
don't have a quarrel with these portrayals, because the Mafia is a work of many facets. Clearly, however, newspapers need to try harder to take advantage of new technologies to tell their stories in ways that attract and involve readers, young or old. He quickly became a well known activist for Islamic revivalism calling for the ouster of pro-western governments using violent means if necessary. But Punjabi news paper has the upper hand because almost population speaks Punjabi, the official language of Punjab. A writer in San Francisco can read a story in New York at 3:00 AM (EST) and have it ready to go in his own paper for the Midnight (PST) deadline.