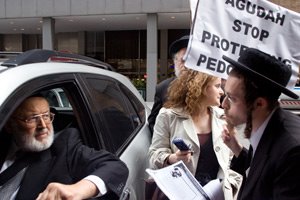 Some readers incorrectly accused Dr Dawg of promoting the view that the Catholic Church holds the patent on child abuse by its clergy. This article from Haaretz should disabuse them of that notion.

Inside the grand ballroom of the Midtown Hilton in Manhattan, Agudath Israel of America's annual dinner was unfolding according to plan. Men and women dressed in traditional yet elegant clothes dined on salmon and listened to Senator Charles Schumer and Mayor Michael Bloomberg pledge their fealty.

Outside, a storm was brewing. A dozen protesters stood in front of the Hilton's parking garage and waved signs that said "Agudah: Stop protecting pedophiles." Most attendees waved off the protesters or ignored them with a look of distaste.

But Agudath board of trustees member Israel Lefkowitz rolled down his car window to chastise the protesters. "I am against sexual harassment for all the children," Lefkowitz said. "But you don't do this in public."

The angry exchange outside the annual dinner May 15 for Agudath Israel, a national ultra-Orthodox umbrella group, encapsulates the escalating battle within the Orthodox community over sexual abuse of children by rabbis, yeshiva teachers and other religious authority figures.

On one side, a band of loosely organized victims of sexual abuse and their supporters are crying out for community leaders to take a tougher stand against pedophilia. On the other side, many powerful leaders regard any public airing of sexual abuse allegations in the Orthodox community as hillul Hashem, a desecration of God's name.

One of the protesters, Mark Appel, yelled at Lefkowitz in his car: "Your children are being molested, and you know that [names of officials from Agudath] are not doing anything about it."

Why such explosive, public display of anger expressed by the members of a community that traditionally avoids drawing attention to itself?

The protesters' ire was aimed at Agudah's opposition to a bill now before the state Legislature that would extend the statute of limitations for civil and criminal claims of child sexual abuse and create a one-time, one-year "window" during which victims of crimes committed beyond the statute of limitations could file civil claims against their alleged abusers and the institutions that harbored them. ...

Agudah's official position is that it supports lengthening the statute of limitations, but opposes the one-year window because it could allow plaintiffs to file decades-old claims.

Rabbi Yaakov Perlow, the Novominsker Rebbe and Rosh Agudath Israel of America, took a harsher tone in his dinner address, chiding "the bloggers and the picketers, presumptuous promoters" for the notion that "they know better [than Agudah's Council of Torah Sages] what is good for the Jews." Perlow called child sexual abuse "a serious issue." He acknowledged a need "for correcting the past - and for addressing the future, creating means to guide against wrongdoing to children."

The protesters find Agudah's statements short on specifics. They accused Agudah of a conflict of interest. The organization is named as a defendant in sex-abuse lawsuits involving Rabbi Yehuda Kolko, accused of molesting dozens of students, including boys at an Agudah-run summer camp, and would likely face more lawsuits if the window legislation passes.

Different fundamentalist, ultra-orthodox religious institution. Same hypocrisy? Same impunity? Discuss. As always, your comments are welcome.
The photograph was found at this blogsite.
Posted by Marie Ève at 8:14 PM