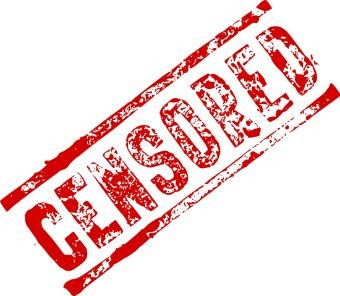 There is nothing wrong with your television set. Do not attempt to adjust the picture. We are controlling transmission. If we wish to make it louder, we will bring up the volume. If we wish to make it softer, we will tune it to a whisper. We will control the horizontal. We will control the vertical. We can roll the image, make it flutter. We can change the focus to a soft blur or sharpen it to crystal clarity. For the next hour, sit quietly and we will control all that you see and hear. --The Outer Limits

First it was Bernie Farber of the Canadian Jewish Congress, helping to prevent impressionable young children in Toronto from being exposed to a book called Three Wishes: Palestinian and Israeli Children Speak. A discussion of the issue may be found here.

Later that same year (2006), a play about a pro-Palestinian activist, My Name Is Rachel Corrie, was shut down because it "might offend the Jewish community."

More recently, the battle trumpets have been sounded by Farber and by the indefatigable Shimon Fogel of the Canada-Israel Committee, because Al-Jazeera English has applied for a broadcasting licence in Canada.

Here's a taste of Farber's bafflegab:

Asked why Al-Jazeera English should not be given a Canadian licence when it is carried by an Israeli provider, Farber replied, “Israel must deal with issues pertinent to its geopolitical circumstances. Canada is in a much different situation with laws that address broadcasting, all of which must be adhered to.”

But Fogel is far more blunt:

Israelis have multiple sources of news and analysis that all focus on the same issues and the same level of intensity as Al-Jazeera, minus the distortion. Here in Canada, however, the audience is considerably more naive and lacks the capacity to view the broadcast in a critical way, or to seek alternative perspectives.

And let's not forget Frank Dimant of B'nai Brith and his bizarre misreading of Caryl Churchill's play, Seven Jewish Children:

The City of Toronto should not allow a venue that it funds to be the staging ground for a divisive play that promotes anti-Jewish hatred. As its name denotes, 'Seven Jewish Children' does not even pretend to target Israel exclusively. It is clearly aimed at maligning Jews, depicting them as oppressors of Palestinians, blood-thirsty aggressors and child killers. It disturbingly inverts history, using Holocaust imagery to allege that the Jews, once the victims, are actively teaching their own children callous disregard for the suffering of others.

Dimant was in the news earlier this year, commending Carleton University for banning a poster he didn't like, and demanding that "Israeli Apartheid Week," a series of events taking place on numerous university campuses, be shut down.

How nice for us to have this gaggle of professional lobbyists around to protect naive, uncritical Canadians like me from seeing and hearing the wrong things and hence drawing "tainted and compromised" conclusions. How wonderful to have this protection virtually from the cradle to the grave.

Man, I'm going to get into trouble for this. The Usual Suspects will pounce, braying about the latest instance, right here at Dawg's Blawg, of International Jewish Conspiracy talk. The Protocols of the Learned Elders of Zion will get a mention. And "left anti-Semitism," of course. But the truth is far more mundane.

In Canada there are all sorts of ethnic lobby groups. (It's OK to call them ethnic lobby groups, by the way--with one exception.) They all advocate for their constituencies, are politically active, work with the media, and so on. They're involved as citizens, and their existence enriches the social and political culture of this country.

But it's also OK to be critical of these groups when their advocacy crosses the line and becomes anti-democratic. And what we are seeing in the instant case is precisely that: advocates who want to shut down debate, censor and ban. There's no conspiracy here, nothing secretive, and plenty of Jewish opposition, like Jewish Independent Voices (scroll to the end). In reality it's just a handful of control-freaks on a power trip, and these come in all shapes, sizes, ethnicities and colours. As citizens, however, it is our right and indeed our duty to push back.

Sometimes I wonder: whatever happened to the Jewish love of disputation? My old friends used to get into lengthy, arm-waving late-night discussions with me at the drop of a hat. Amos Oz, in This Land of Israel, describes an incident in that country where he was pulled into a discussion by right-wingers, told to sit down with them, peppered with questions, given cigarettes, listened to, harangued.... There was no talk of banning; there was heated debate, but no hatred. Nobody told him to shut up--indeed, they wanted him to speak, to argue with them. Engagement was the thing.

Farber, Dimant and Fogel could learn a lesson or two from them.