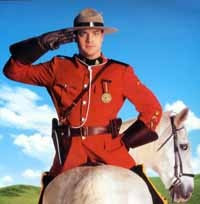 The Braidwood Inquiry is lurching to a conclusion, with testimony likely to finish next week and final arguments to be presented at the end of the month.

It's been a rough week for the Four Horsemen, and for Taser International, too.

First it was a police psychologist, Mike Webster, who has been training police forces for more than thirty years. To say that he didn't mince words would be somewhat of an understatement.

"Fools rush in," he said. "They [the Four Horsemen] panicked and they abandoned their basic training and they embraced their more recent and questionable Taser training provided for them by their misguided employer."

And there was more:

Webster said that Dziekanski was clearly upset, after his "gruelling journey" of more than 30 hours from Poland to Vancouver without meeting his mother, and that he actually was glad to see the RCMP arrive to help him, calling out "Polizia, polizia," and dropping his hands to his side in a release of tension.

But then, Webster said, RCMP gave him conflicting commands to get his passport and when he turned to his suitcase to get it, told him to move away from his luggage and put his hands on the counter.

"Following the contrary commands came the pointing of at least one black leather-clad finger," said Webster, noting Dziekanski then threw up his hands in exasperation. Then came what Webster called the "circling of the wagons," as the officers surrounded him with their hands on their duty belts in a menacing fashion.

Said Webster: "Mr. Dziekanski was their client and it was their responsibility, not his, to take control and calm him down."

He still wasn't done. Describing the RCMP as a "sick" institution, he called senior management "dinosaurs" who are still in the "dark ages" of police work.

"I am embarrassed," he said, "to be associated with organizations that Taser sick old men in hospital beds and confused immigrants arriving to the country. Frankly I find it embarrassing."

Unsurprisingly, the outspoken Webster has seen his consulting work with the RCMP dry up in the wake of his public comments. "Unfortunately the RCMP is not a healthy organization and is unable to take criticism," he said. "I've become something of a pariah."

Next it was the renowned forensic pathologist Dr. John Butt, awarded the Order of Canada in 2000 for his nearly four decades of work in the field.

Dr. Butt shredded the autopsy report of pathologist Dr. Charles Lee, who failed to mention the repeated Taserings that Robert Dziekanski had suffered, or the marks on his back caused by the Taser probes, but claimed that "chronic alcoholism" had contributed to his death. (Video here; testimony of Dr. Lee here.)

Butt disputed Lee's statement that heart damage had been present as a result of alcoholism:

"I think this is probably a cardiac-related death 'de novo,' a new event unheralded by previous symptoms," said Butt, noting that he reviewed Dziekanski's health records back to 1994 and found "no indication" of heart problems or high blood pressure.

As for the Taser:

"Given the circumstances of the death of Dziekanski, in my experience it would be uncommon for the role of a weapon (e.g. Taser) to be left without a discussion as was so in Lee's report," noted Butt's report.

Butt also urged that "caution is advisable about use of the term 'excited delirium,'" which has often been cited as a cause of death following Taser use. Butt said that "diagnosis" is "questioned by those practising psychiatry . . . (and) often is defined by persons who have neither training in nor experience with aberrant behaviour."

Concluded Butt: "I believe that increasing exertion and stress seen following the discharge of the Taser likely contributed to the death of Robert Dziekanski."

It's hard to imagine how the RCMP as an institution could absorb much more punishment than it has received over the past several weeks of the inquiry and remain standing. It seems, in fact, that the force is shifting its position in advance of Justice Braidwood's conclusions, judging from the belated apology by Deputy Commissioner William Sweeney a few days ago delivered to a Senate Committee studying RCMP reforms. This follows another official apology two weeks ago from senior media relations officer Sgt. Tim Shields.

"We are very sorry for Mr. Dziekanski's death," said Sweeney. "We are committed to learning as much as possible from the circumstances surrounding his tragic death."

"We must spend more time with our training to use de-escalation techniques in a much more effective manner than perhaps we have in the past," he said. "In my day, it was always talking. We prided ourselves on time, talk and, if necessary, tear gas before we attempted to do any sorts of interventions that would physically cause harm to others."

This sounds as though the RCMP is all but throwing in the towel, even if Sweeney hedged, cautioning that "[s]ometimes things happen so quickly that the outcome is not one we would have desired." But that's pretty flabby stuff, given what we have learned so far about the conduct of the Four Horsemen before, during and after the killing of Robert Dziekanski.

Judging from his words as a whole, we might safely conclude that their futures in the RCMP are not bright. But they are, as Webster and many others have indicated, a mere symptom of serious institutional disease. And that is likely incurable, no matter what the outcome of the inquiry.
Posted by Dr.Dawg at 11:28 AM

Just desire to say your article is as astonishing. The clearness to your publish is just great and i could
think you are knowledgeable on this subject. Fine together with
your permission allow me to snatch your feed to keep updated with forthcoming post.

Thanks 1,000,000 and please continue the gratifying work.
Also see my web page > click through the next page

Hola! I've been reading your blog for a while now and finally got the bravery to go ahead and give you a shout out from Humble Texas! Just wanted to tell you keep up the fantastic work!