Is the fix in? [updated] 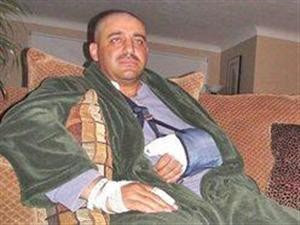 An off-duty Ottawa police officer implicated in a vicious assault on a taxi driver yesterday is still on active duty. He has been identified as a marine officer in the Ottawa Police Service's East Division.

None of the local news outlets, including the Ottawa Citizen, has carried this identifying information: it appeared in the North Bay Nugget. Here's more:
Const. Alain Boucher, a police spokesman, said the force wasn't looking for any help from the public on the investigation.

Steve Boucher, president of the police association, called the officer a "very decent individual" who received minor injuries in the confrontation.

The officer was "swarmed" by cabbies, said Boucher, who believes the officer will be cleared of wrongdoing after the investigation.

A thought-experiment: suppose a taxi-driver had viciously beaten an off-duty Ottawa police officer. Would he be driving his cab today? Would the police be warning away the public, saying, in effect, "We don't need your help, thanks?" Would the cabbie have been allowed to drive away from the scene of the attack? Would no charges have been laid? Would the cabbie's name be kept out of the media? (If anyone can identify the officer, I shall publish his name here. The public has a right to know just who is "serving and protecting" them.)

The results of the internal police "investigation," carried out by the officer's colleagues, "won't be known for some time."

"I pray to God he's not a policeman," said the victim, Sami Aldoboni, who was not then in the know. "A bad apple like that would hurt the good people of policing."

This poor man, I suspect, is about to learn an important civics lesson.

UPDATE: (May 14) Well, well. The Ontario Special Investigations Unit has stepped in, putting the Ottawa police internal investigation on hold. The SIU will be investigating the conduct of the off-duty cop to determine if criminal charges should be laid. The assailant has been placed on desk duty until the investigation is completed. While it's still police investigating police, and a whitewash is possible, this is clearly a positive development.

Yesterday afternoon, representatives of the taxi drivers' union (CAW) met with Ottawa Police Chief Vern White, a man who has made serious attempts to reach out to the community ever since he replaced the cocky, old-school Vince Bevan. The meeting apparently went well. The behaviour of the off-duty cop and his buddies on the force who arrived at the scene will be reviewed internally once the SIU investigation has concluded. White's spokesperson, Inspector Mike Flanagan, has promised transparency.

And that's just what the public is demanding. According to city councillor Eli El-Chantiry, his phone and those of his fellow councillors have been ringing off the hook with calls from irate citizens. In an editorial, the Ottawa Citizen makes the key point: "Ottawans will not stand for abuse of power in their police service. Chief White faces a major test of his credibility."

UPDATE: The assailant has been identified as Const. Shyldon Safruk, a member of the police marine unit. His foster brother says he's an "easygoing" kind of guy. His Facebook page has been disabled.

Hi i am kavin, its my first time to commenting anywhere, when i read this article i thought i could also create comment due to this
good post.

My web blog: what should i weigh

The city of Danbury's metro options into NYC, give anyone in New Milford, Newtown, Bethel, New Fairfield and Sherman options for travelling south. Make sure that you don't end up with
a look of patches by checking to see that the glitter falls all the way around the edges
of a newly-painted area. Repairing larger cracks or holes in driveways takes a little more time
and preparation.

Whether you are searching for specialty styling products or
specific Loreal hair products, you are sure to find what you
need. s Therapy Treatment line, which is a lightweight replenishing treatment that protects and maintains
hair condition. Soon after this, use curl lotion all more than your hair, and make use of mousse and squeeze this in your hair to that your curls
seem flawless.