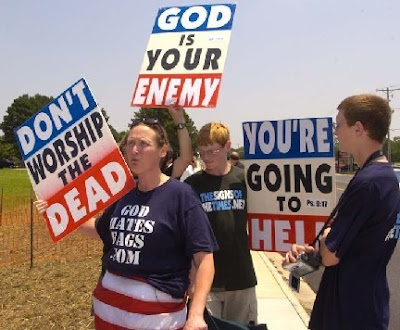 ...but why isn't picketing funerals in Canada a criminal offence? And why are Americans bearing their vile imports of obscene hatred permitted to cross our borders with impunity, while peace activists are turned away?

And one last question: why is the Right so unconcerned? Cons love to point the finger at alleged "anti-Semitism" on the Left, but have nothing whatsoever to say about this sort of thing:

Whatever righteous cause the Jewish victims of the 1930s-40s Nazi Holocaust had... has been drowned in sodomite semen. American taxpayers are financing this unholy monument to Jewish mendacity and greed and to filthy fag lust. Homosexuals and Jews dominated Nazi Germany.... The Jews now wander the earth despised, smitten with moral and spiritual blindness by a divine judicial stroke.... And God has smitten Jews with a certain unique madness... Jews, thus perverted, out of all proportion to their numbers energize the militant sodomite agenda... Jews are the real Nazis.

UPDATE: Damian Penny prompts me in the comments to be a little clearer. I was not claiming that conservatives are pro-Phelps--far from it, in fact. They tend to be just as vitriolic about that bumpkin and his brood as progressives. The question for me was, He's on his way here: what do we do about it?

As commenter Reality Bites suggests in the very first comment here, the Phelps crowd are entering Canada with the explicit intention of breaking the law. (The answer to my first question in the post has been answered: it is illegal to picket funerals in this country.) The response on the Left has generally been, keep them out.

Chris Selley suggests that I haven't given the conservative camp adequate time to respond. And, indeed, as of this writing, Damian has wondered aloud why they should be permitted free passage, and some old familiar faces at Dust My Broom have called for their exclusion. Moreover, Damian has a point when he notes that most people aren't even aware of Phelps' virulent anti-Semitism.

The long and the short of it is that I should have been satisfied to end the post after my first paragraph. If folks want to take this as an apology, I won't object.

UPPERDATE: Commenter Chris Selley indicated that Phelps and his brood have been stopped at the border. This has just been confirmed by the National Post. The brood has threatened to enter Canada at "another spot."

UPPESTDATE: (August 8) Looks like some of the Phelpspawn might have made it through. Immigration services ought to scoop them wherever they raise their ugly heads. Alternatively, if they show up at the funeral, they could be charged under Section 176 (2) and (3) of the Criminal Code (h/t RealityBites):

(2) Every one who wilfully disturbs or interrupts an assemblage of persons met for religious worship or for a moral, social or benevolent purpose is guilty of an offence punishable on summary conviction.

(3) Every one who, at or near a meeting referred to in subsection (2), wilfully does anything that disturbs the order or solemnity of the meeting is guilty of an offence punishable on summary conviction.

Or with criminal stalking:

(2) The conduct mentioned in subsection (1) consists of

(a) repeatedly following from place to place the other person or anyone known to them;

(b) repeatedly communicating with, either directly or indirectly, the other person or anyone known to them;

(c) besetting or watching the dwelling-house, or place where the other person, or anyone known to them, resides, works, carries on business or happens to be; or

(d) engaging in threatening conduct directed at the other person or any member of their family.

3. Without limiting the generality of section 2, privacy of a person may be violated

(a) by surveillance, auditory or visual, whether or not accomplished by trespass, of that person, his home or other place of residence, or of any vehicle, by any means including eavesdropping, watching, spying, besetting or following;