A community fights back 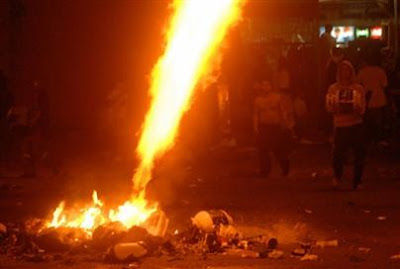 Another unarmed immigrant in Montreal, Fredy Alberto Villanueva, 18, is cut down by cops in a hail of bullets. But this time the tipping-point is finally reached. The young man's community is now in open rebellion against the police. It's hard to feel unsympathetic.

The Montreal police over the past few years have cut a murderous swathe through immigrant communities in the city, although, to be fair, they've been equal-opportunity in this respect, killing their share of native-born Quebeckers as well. Between 1987 and 2006, more than forty people have died at the hands of police in Montreal, many under dubious circumstances.

Martin Suazo, 23. Peruvian-born immigrant, suspected of shoplifting a pair of jeans. He was handcuffed and on his knees. Police officer Michel Garneau shot him at nearly point-blank range in the back of the head. After five years of proceedings, Garneau received a 45-day suspension from duty, and on his return was promoted to an elite tactical squad.

Paolo Romanelli, 23. Caused a superficial wound to an officer with a kitchen knife, then barricaded himself in his apartment. Without waiting for a tactical team and a negotiator to arrive, the cops on the scene decided to rush the apartment, and shot Romanelli dead.

Anthony Griffin, 19. An unarmed Black youth, shot by police constable Allan Gosset while running away. Gosset had ordered him to stop running; Griffin did, but Gosset shot him anyway. This wasn't the first time that Gosset had been involved in this sort of thing: in 1981, according to one report,

Gosset stopped Daniel Ochtere, a Ghanaian-Canadian who has a master’s degree in business administration. In French, Gosset threatened: “If you don’t get out of the car, damn nigger, I’ll hit you in the eye.” Ochtere, who did not understand, was confused. He opened the door. Gosset then grabbed him. A second officer immediately struck Ochtere in the face with a flashlight, breaking his nose and jaw. Ochtere was thrown on the ground, beaten, arrested and taken to Bonsecours jail.

Gosset beat a criminal negligence charge on appeal in the Griffin killing.

Marcellus Francois, 24. In a classic case of "they all look alike," Francois was mistaken for another Black man, and shot by Sergeant Michel Tremblay while sitting, unarmed, in his car. Tremblay used a machine gun. No charges were laid against him.

Richard Barnabé, 39. A taxi driver, beaten into a vegetative state by cops after breaking a church window.

Mohamed Anas Bennis, 25. Shot by police after leaving a mosque. The police were involved in an action that had nothing whatsoever to do with Bennis. Afterwards, they claimed he had stabbed one of them. A veil of secrecy surrounds their actions on that day and the decision not to charge the officers with anything.

As seems to be the case across Canada, Montreal police officers are protected by a culture of impunity that extends into the judicial and government realms. The cops who put Richard Barnabé into a fatal coma were given the usual wrist-slap sentences by a judge--community service and a few days in jail. The killer of Martin Suazo, as noted, received a light suspension and a promotion. Montreal is a city where even photographing cops harassing people in a park can land you with trumped-up charges and a hefty fine.

Since the 1994 Malouf report, which found the Montreal police badly supervised, improperly trained, ill-equipped and racist, things were supposed to improve. But they clearly have not, at least in the perception of the communities being policed. Jean-Ernest Pierre, who is a lawyer and the owner of a popular radio station in Montreal, says, "We've seen many cases where blacks and other minorities have been shot for no reason. People are angry, but more than that, they want answers."

But such answers are almost impossible to get from police forces across the country. An RCMP spokesman in the Ian Bush shooting contemptuously stated that "The public doesn't have a right to know anything." And in the Bennis case, the Quebec Ministry of Public Security has bluntly refused to disclose the original police report of the shooting.

Without answers, only anger is left. It is hard--very hard indeed--to fault a community for actively resisting police oppression that can prove fatal to its members.

The Villanuevas immigrated from Honduras in 1998. "We thought we were going to be better off," Fredy's sister Julissa said. "We thought there was justice here. We thought the police were supposed to protect us." Quis custodiet ipsos custodes, indeed.

UPDATE: Aw, for crying out loud. Kate and her commenters think it's the damn Moozlums again, and some of the latter are calling for mass extermination. For its part, Associated Press highlights the "Black" element (15% of the community!), as does the leader of a community outreach group:

Pierreson Vaval, director of a community outreach group, was at the scene of the riots Sunday night.

He said many of the rioters were black, but there were people there from every minority group.

He said the riot is the result of pent-up anger against police.

Fredy Alberto Villanueva was Honduran by birth--neither Muslim nor Black, he was Hispanic and most likely Catholic. A community of many cultures has had enough, but some are too busy chasing their chosen demons to see it.