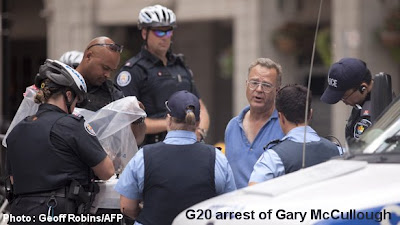 By the time G20 arrestee Gary McCullough has his next court date in December, he will have spent six months locked up without bail for no other reason than the police and courts are unable to admit they should never have arrested him in the first place.
Picked up in a pre-G20 police sweep back in June, police admitted within hours of his media-sensationalized 'terrorist' arrest that he had nothing to do with G20 but the illegal search and seizure of his vehicle turned up a crossbow among his tools, albeit properly secured in a carrying case, so he was charged with "possessing a weapon for a dangerous purpose".
Toronto police Const. Hugh Smith :

"It's lawful to have them in your possession … but with close proximity to the summit, we are going to relate it, you know, to the G20 and the safety. So there was more than enough to arrest."

Exactly what "dangerous purpose" do they expect to prove here?
He has threatened no one.
He owns a crossbow because he hates guns and carries it for protection from bears on his rural property.
He was in Toronto to get his car window fixed.
He had all his remaining possessions loaded into his car because someone burnt his rural house down and he is currently rebuilding it.
At his court appearance yesterday, the judge proclaimed the schizophrenic McCullough unfit to stand trial following his months in solitary confinement for his own protection after he was beaten up by other prisoners. The judge has ordered a third psychiatric assessment and remanded him to a psychiatric hospital.
Is this for his own good? No it isn't. At his bail hearing in August, Justice of the Peace Paul Kowarsky displayed an extraordinary lack of understanding of rural life :

"I see no sense that he had to bring all the items for the sole purpose of being in Toronto and running an errand." In denying bail, the justice added: "The inference is he carried all these items for a purpose dangerous to the public."

I fail to see how yet another psychiatric assessment of McCullough will get the just ice system off the hook for persecuting an innocent man for six months.
Posted by Alison at 2:19 PM