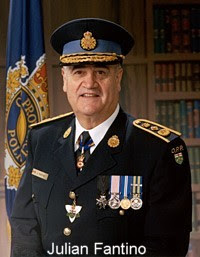 "Regardless of reality, the issue of race must not be ignored or discounted." [That sentence is a keeper, isn't it? --ed.]

Peter Kormos, a Southern Ontario MPP and a frequent critic of Commissioner Fantino, said yesterday the province's top police officer should resign after making "threatening, inflammatory" comments to a native leader during the standoff, according to the provincial NDP.

He says Commissioner Fantino contravened the spirit of the Ipperwash report when he told [activist Shawn] Brant he would do "everything I can within your community and everywhere else, to destroy your reputation."

"It's being forced on us," Fantino said. "We are conscientious about diversity and sensitivity and all those kinds of things. Is it necessary? I think that in many respects this is a duplication of much of the work we already do."

The agreement, signed between the Toronto Police Services Board and seven complainants and approved by the Ontario Human Rights Commission yesterday, closes the book on a raid on a female bathhouse by police more than four years ago.

After being alerted by two undercover female police officers inside the event, the five male officers raided the place — spending 90 minutes on what was described as a routine liquor licence inspection.

The raid by five male officers on a bathhouse filled with hundreds of women, many partly undressed, was deemed an outrageous, flagrant, deliberate, unjustified violation of the women's Charter rights by the Ontario Court of Justice two years ago. In throwing out the liquor licence infractions against the venue, Justice Peter Hryn compared the officers' entry into the club to a strip search.

Fantino’s few bad apples had turned into a barrelful.

By 2006, more allegations would surface...that more than a dozen more charges of police brutality and corruption had been swept under the rug.

What's not to like? Obviously a star Conservative candidate.