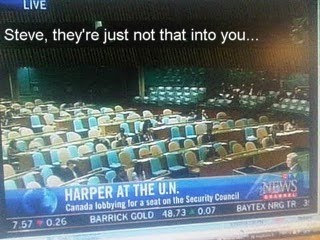 The phrase is bandied about to describe those of us critical of "the only Western democracy in the Middle East," when we aren't being falsely accused of outright "anti-Semitism." But shouldn't we turn that around?

The other day an article appeared that made the case for not giving Canada--under its current leadership--a seat on the UN Security Council. It briefly surveyed our international record under Stephen Harper, and it makes for grim reading:
At this point, Liberal MP Carolyn Bennett was nodding in some agreement, and she re-Tweeted a reference to the article with the word "Interesting." And then the proverbial ordure encountered the spinning blades of the pro-Israel lobby.

It seems that Bennett had not read the article through to the end. A further reason to be critical of our international performance, said the author, Derrick O'Keefe, and this time I quote rather than paraphrase, was:
To which, once again, I would add the word "Check." Our uncritical support of Israel--our blatant double standard in this respect at home and abroad--is nothing short of an embarrassment.

But Bennett came under some pressure, it seems, and she freaked out, as we Summer of Love types would put it. The tone of what she has to say is particularly unsettling. There's more than a whiff, here, of the self-abasing confessions offered by the victims at Stalin's show trials. Here, judge for yourselves:

I was shocked to be tweeted back asking if I supported the anti-israel [sic] rhetoric in the article. I went back to the article and was upset to realize that the article I had read on my berry had truncated and that I hadn’t read the last paragraphs before I retweeted the article. This is a serious lesson for me. I am thankful how quickly the error was pointed out to me and that I was able to reply that in no way did I support the anti-Israel message. As I hadn’t really agreed with the premise of the article I had used the word 'interesting' on purpose. But I now realize that as an MP if I cite an article it can be interpreted as 'promoting' it or worse yet that I agree with every word. In the future I promise to be more careful and to make clearer my support or lack of support for the opinions being put forth in the 'link'. Mea culpa. It has also been pointed out to me that I should be wary of certain publications, authors as an initial screen. I will do better in the future. I learn a great deal using social media tools… The information, the frank feedback are all part of a learning culture and a 'democracy between elections' in which citizens and their elected representatives can interact in real time. I take this responsibility seriously. I apologize for today’s error.

Good grief, has it come to this?

In other news, we are still awaiting the final report of the Canadian Parliamentary Coalition to Combat Antisemitism, due, like the forensic auditors' report at Rights and Democracy, this past Spring. Should be, ah, "interesting."
Posted by Dr.Dawg at 10:28 AM

Maybe that's all it was, but her self-abasement was still over the top.

As an aside; how many of the 14% would even have been upset by the article that she found 'interesting'? I doubt even half of that fairly conservative crowd would. But I suppose the most vocal would be upset.

I might be the first to suggest that Bennett's quick about-face on this is entirely 100% demographic politics, but I find it strange that no one else that lives in Toronto has made this point. I lived in her riding, right on the edge of Forest Hill. The entire centre section of her riding, Forest Hill, is a very affluent neighbourhood made up largely of Jewish families.I suspect that although only 14% of her riding is identified as religously Jewish (according to WP), it is likely a very powerful voting group, and it clearlyrepresents a significant portion of her support.

My point hereis that it might be difficult to separate her intentions from her practical assessment of her chances of losing her seat in the next election.

Steve,
The phrase was in quotes.
To the substantive point though, Dawg and other bloggers keep demanding evidence that anti-Zionism exists in the way I've described it, as if there were doubt. I would have thought that the better approach is what you've just demonstrated.
The fact is that mainstream thought strongly favours the two state solution, thereby being critical of continued settlements while rejecting anti-Zionism. Obama's UN speech this week is the mainstream view.
I maintain that the Canadian activist Left is effectively trying to isolate or "purge" the broader left of pro-Israel thought. Is there any less evidence for that proposition than there is for the thesis of the line of thought that someone pressured Bennett to bend in this instance?
And having looked at all these links again there is actually no evidence that Bennett was pressured to change her mind. Her statement seems credible to me and certainly more persuasive than the idea that there was a show trial. If so, who put her on trial? Where is the evidence for that "accusation?". Why must those who tend to support Israel always be smeared when those who advocated for Palestine complain about smears against them?

it may not have occurred to you, Dawg, but Carolyn has been a consistently strong supporter of Israel, and upon confirming the full text of the article, she wanted to make it clear that she didn't want to be associated with the idiotic vews expressed about it.

Quite commendable, really, on her part.

Your position is clear, you want to label Israel as an "apartheid" country, although you really should invest in a dictionary before you continue with that. Apartheid doesn't usually allow for racial integration and full enfrachisement, but what's a few facts here or there?

You might want to look into the Palestinan law that proscribes the death penalty for anyone selling land to Jews and see where that fits into your apartheid concepts, or can we assume that's just fine with you?

Imagine.. a parliamentarian wants to make sure that her position on an issue isn't misconstrued, and since you don't like that position, it must be part of some conspiracy. Suffering from a little LDS yourself, it seems.

And by the way, I'm the one who alerted Carolyn to the full content of the article. We had a nice conversation in which I suggested to her that rabble is not the sort of publication that lends itself to credibilty. I make the sacrifice of wading into that ideological cess pool from time to time to see what the other side is up to, but rabble.ca articles probably shouldn't be referred on other than for the purposes of being mocked.

OK, Antonia, if we stick to that core issue, it seems to me someone should ask her on the record for an explanation.

This seems to be becoming typical of Marky's style. Everything resolves to "the destruction of Israel," as he relentlessly tries to derail threads. Anyone else a little tired of this?

Good grief, what filth (the Sun piece). It's neo-McCarthyism at its worst.

Beluga2; What about the dude who apologised for stopping Cheney's bullet? That was classic!!

I haven't seen that kind of groveling since the "Don't taze me bro" dude got down on his knees and apologized for making the police taser him.